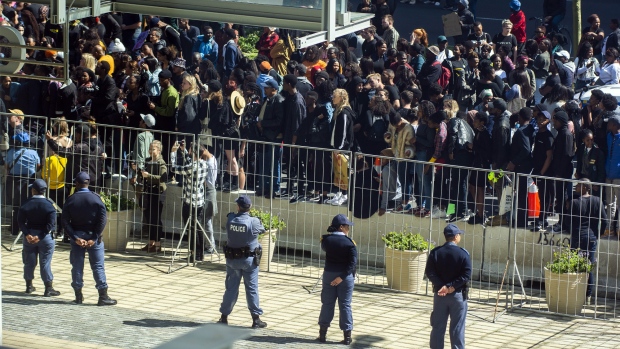 (Bloomberg) -- The World Economic Forum on Africa was supposed to be South African President Cyril Ramaphosa’s chance to prove his nation’s claim to being the continent’s top investment destination. It’s all gone horribly wrong.

The lead-up to the gathering of political and business leaders in Cape Town was marred by a series of xenophobic attacks, with scores of foreign-owned businesses burnt and looted, and mass protests against horrific abuse of women. A demonstration was held outside the WEF meeting on Wednesday and saw police firing stun grenades and water cannons to disperse the crowd.

On Thursday, about 10,000 protesters gathered outside parliament in the city to demand that the government do more to tackle femicide, and Ramaphosa canceled an appearance at WEF to address them. He pledged to announce an action plan in a nationwide address later in the day.

One woman is killed in South Africa every three hours, police statistics show, while the country has been plagued by intermittent attacks on foreigners, who are seen by some in poor communities as competitors for jobs, housing and business opportunities. At least seven people have been killed in the latest wave of attacks, which have drawn outrage from other African government.

The violence couldn’t have come at a worse time for Ramaphosa, who’s been on a drive to attract $100 billion of new investment, revive the economy and tackle a 29% unemployment rate.

To contact the editors responsible for this story: Paul Richardson at pmrichardson@bloomberg.net, Gordon Bell