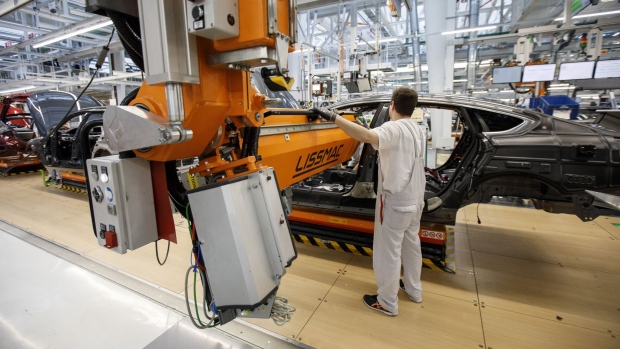 An employee uses a robotic arm, manufactured by Lissmac Maschinenbau GmbH, to fit a dashboard into an Audi A5 automobile on assembly line inside the Audi AG headquarter factory in Ingolstadt, Germany, March 14, 2018. Bloomberg

Volkswagen AG’s premium Audi brand plans to cut 9,500 jobs in Germany as part of a sweeping overhaul to improve earnings by around six billion euros (US$6.61 billion) over the next decade.

The positions will be culled through voluntary measures and a policy not to fill vacancies, Audi said in a statement Tuesday. The remaining approximately 50,000 employees in Germany will have job guarantees until end-2029 and Audi will create 2,000 new jobs to develop future technology like electric cars and digital offerings.

Audi’s overhaul mapped out earlier this year is aimed at regaining ground lost to luxury-car leaders Mercedes-Benz and BMW AG. Parent Volkswagen AG picked Markus Duesmann, 50, as the brand’s new chief to replace Bram Schot next year in a broader management board shakeup after talks over with labor unions dragged on for months.

VW poached Duesmann from BMW, where the mechanical engineer rose through the ranks to head purchasing after joining from Daimler AG‘s Mercedes-Benz division.

Audi has been wrestling with stricter emission tests that took effect in Europe last year and led to significant production bottlenecks that bogged down deliveries.

Separately, the brand struggled to draw a line under the diesel-emission scandal, which culminated in the arrest of former Audi CEO Rupert Stadler and a 800 million-euro (US$881 million) fine.