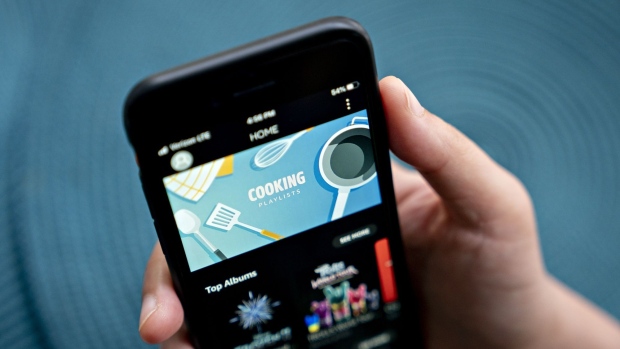 The Amazon Music application is displayed on a smartphone in an arranged photograph taken in Arlington, Virginia, U.S., on Thursday, May 21, 2020. Audible's, the audiobook service owned by Amazon.com Inc., big push into the booming audio genre has confused some producers and podcast networks because it is happening at the same time that Amazon Music, a separate division of the e-commerce giant, is also ramping up its investment in podcasts. Photographer: Andrew Harrer/Bloomberg , Bloomberg

(Bloomberg) -- About a month after Audible announced that Brad Schwartz would oversee its big push into original audio series, the executive has left the Amazon.com Inc. division.

Audible reconsidered having Schwartz take over as the audio-book company’s chief content officer, according to people familiar with the matter, after employees discovered an old sexual-harassment lawsuit in which Schwartz was named.  Employees voiced their discomfort to management, and the two sides negotiated his exit, said one of the people, who asked not to be identified because his departure isn’t public.

It’s not the first time that harassment allegations have spurred a shake-up at Audible. Just three years ago, the company fired two top executives due to claims of workplace harassment.

Schwartz was seen as one of the most eligible executives in entertainment following his run at Pop TV, where he oversaw the acquisition and release of the comedy “Schitt’s Creek.” That show, created by the father-son team of Eugene and Dan Levy, was nominated for best comedy at the 2019 Emmy Awards and has found an even larger fan base courtesy of Netflix Inc.

But not long after the announcement, some of Schwartz’s new employees learned a former advertising sales executive at Pop had sued the network for allegedly fostering a hostile work environment for women, claiming senior male executives made inappropriate and demeaning comments and threatened women who spoke out. Leslie Isaacs, the plaintiff, didn’t sue Schwartz, though she did say he approved a press release headlined “Pop Puts Out,” criticized a female executive who objected to it and was aware of other inappropriate behavior.

Pop, owned by CBS and Lions Gate Entertainment Corp., hired a law firm to conduct an internal investigation. Michael DuPont, who was sued by Isaacs, continued to work at Pop until earlier this year, when he left as part of a larger restructuring related to Viacom Inc.’s merger with CBS Corp.

The judge sent the case to arbitration in August 2018, and Isaacs asked for the suit to be dismissed later that year.

Schwartz joined Audible to ramp up its investment in original audio series, which are more like podcasts or old radio dramas than books. The company has already spent millions of dollars to produce shows with the likes of civil-rights activist Colin Kaepernick, rock star St. Vincent, and actors Riz Ahmed and Christian Slater.

While Audible is the dominant player in audio books, it has struggled to get its listeners to embrace its original content and faces competition from Spotify, which is spending more than $1 billion to transform its music service into a broader platform for original programs.

Audible will now need to reorganize its programming operations yet again. In 2017, the company’s chief content officer and chief revenue officer resigned following an internal investigation into workplace culture.