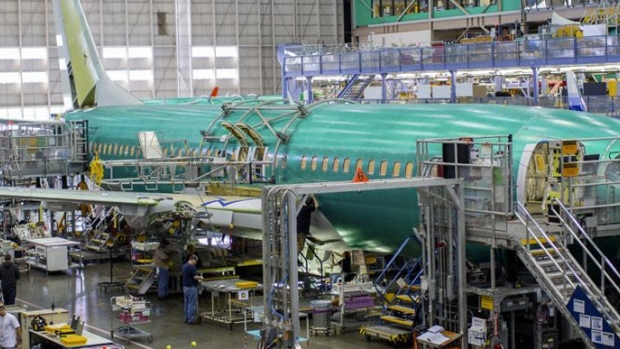 A nearly completed Boeing Co. 777 reaches the end of a moving production line at the company's facility in Everett, Washington. , Photographer: Mike Kane/Bloomberg

(Bloomberg) -- Regulators overseeing changes on Boeing Co.’s 737 Max rejected an audit of how the software was being developed, prompting the company to make revisions and possibly slowing the return of the jetliner to service, said a person familiar with the action.

The issue with Boeing’s audit was brought up in recent days at a meeting in a Collins Aerospace Systems facility in Cedar Rapids, Iowa, attended by officials from the Federal Aviation Administration and the European Aviation Safety Agency, said the person.

Boeing and Collins, a division of United Technologies Corp. that developed computer automation on the 737 Max, are making changes to a safety feature on the jet that was involved in two fatal crashes on the plane that killed 346 people. As a result of testing in recent months, Boeing is also undertaking a more complex revision of how the flight computers on the plane function.

Full audit results are required before final simulator tests of the changes can be conducted. Depending on how long it takes to satisfy FAA and EASA, it could push back a certification flight test and regulators’ final decision on lifting the flight ban by a few days or even weeks, said the person.

Boeing, in a statement, said it provided technical documents to regulators “in a format consistent with past submissions.”

“Regulators have requested that the information be conveyed in a different form, and the documentation is being revised accordingly,” according to the statement. “While this happens we continue to work with the FAA and global regulators on certification of the software for safe return of the MAX to service.”

EASA Executive Director Patrick Ky said after the Iowa meeting, “we think there is still some work to be done,” according to Janet Northcote, a spokeswoman for the agency. She declined to specify the issues.

The issues with the audit were earlier reported by Reuters.

(Updates with Boeing statement in the fifth paragraph.)