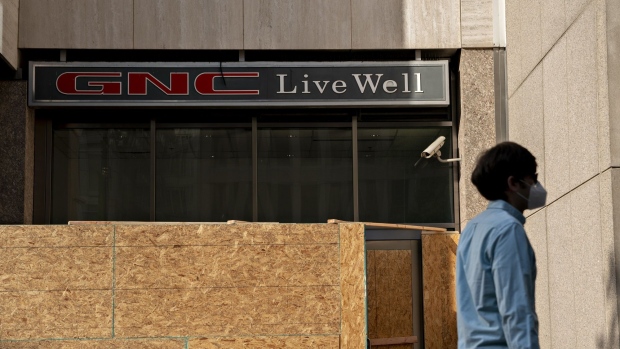 A pedestrian wearing a protective mask walks past a boarded up GNC store in Washington, D.C., U.S., on June 4, 2020. GNC Holdings Inc. and its senior lenders are negotiating a bankruptcy loan just days before a crucial debt deadline for the vitamin retailer, according to people with knowledge of the matter. Photographer: Andrew Harrer/Bloomberg , Bloomberg

Bankruptcy filings have plunged compared to a year ago - but experts expect uncertainty ahead as government supports end and deferred payments come due.

The Office of the Superintendent of Bankruptcy Canada says the total number of insolvencies in August 2020 fell 42.4 per cent compared with August 2019.

About 42.7 per cent fewer consumers filed, while business insolvencies decreased by 25.5 per cent, according to the Sept. 28 data. The data does not include filings under the Companies' Creditors Arrangement Act, which has been used for creditor protection this year by companies such as Mountain Equipment Co-operative, Groupe Dynamite, David's Tea and Reitmans Ltd.

Despite the drop, a wave of consumer insolvencies could come later this year, says Keith Emery, co-CEO at Credit Canada Debt Solutions, a non-profit credit counsellor.

“Those year-over-year reductions in consumer insolvencies - in our estimation, that doesn't reflect that those people are no longer insolvent. Those insolvencies are just not being processed,” says Emery.

“So those people are essentially sitting in the wings â€¦ they haven't dealt with the underlying debt.”

The decline comes as many people are still jobless after the COVID-19 lockdown doubled the unemployment rate between February and May. But government supports, such as debt payment deferrals and Canada Emergency Response Benefit have kept household budgets on balance, says Emery.

Some of those supports are now winding down. Payments resumed on Oct. 1 for Canada Student Loans, after a six month freeze. CERB is over, and its recipients are trying to transition to new programs.

“There's a hidden story inside of that lower number (of insolvencies). And we're seeing it across the industry, we've been talking about it in the industry, quite extensively. It's called the deferral cliff,” says Emery.

If deferrals and income supports wrap up near-simultaneously, it could cause a “massive reversal” in insolvency trends, Emery says. Workers may be supplementing a gap between their income and expenses by borrowing, only to find they hit their limits.

Isaiah Chan, director of counselling at Credit Counselling Society, says that TransUnion data collected during the pandemic shows that people are being more cautious and saving more, perhaps to stave off making big financial decisions. He says that people also sometimes wait too long to seek free credit counselling or even to ask their boss about future layoffs, out of fear or embarrassment.

Some groups have been left particularly vulnerable by the COVID-19 pandemic. For example, women have historically been less slightly likely than men to file for insolvency, based on Statistics Canada analysis from 2007 to 2016. But, since the start of the pandemic, women have lagged men in recovering key employment measures, such as labour utilization.

Workers in the hard-hit hospitality sector, for another example, have been disproportionately young, female and newcomers and racialized groups - putting them at more financial risk, Emery says. Gig workers are another group who have unpredictable income and thus may struggle to come up with a plan for when deferrals end, he says.

Emery says he is preparing for the possibility that between now and mid-2021, there could be a triple-digit year-over-year percentage increase in consumer insolvencies. He says that even if consumers have received extensions on their debt payment deferrals or employment insurance benefits, they should try to seek credit counselling soon, before these services become overwhelmed with requests.

“We help them re-negotiate â€¦ a credit counsellor will sit down with you, and go through your full financial situation. They'll look at your budget, they'll look at what those payments look like, and figure out a plan on how you can resume those payments,” says Emery.

Emery says workers should be prepared for it to take about a year for them to get back on their feet.

“They might be able to just manage their expenses. But they're going to have a lot of difficulty managing the debt payments. That's a real concern, especially in cases where maybe creditors are expecting them to catch up,” says Emery.

As for businesses, Gowling WLG lawyer Patrick Shea says much is still unknown in terms of why insolvency filings are falling. It could be anything from less aggressive lenders or ongoing negotiations between tenants and landlords, said Shea, noting that there has also been government support flowing to businesses through wage subsidies.

Among the businesses that were counted in the OSB report, construction, and accommodation and food services saw the biggest year-over-year declines in insolvency filings.

Retailers and entertainment venues saw the biggest increase in insolvency filings in August.

Some small businesses owners may be struggling so much that they cannot afford the fees of filing a formal bankruptcy proceeding, Shea says.

“I'm betting that is what is happening with a lot of small businesses like restaurants and smaller retail stores that have closed,” says Shea.