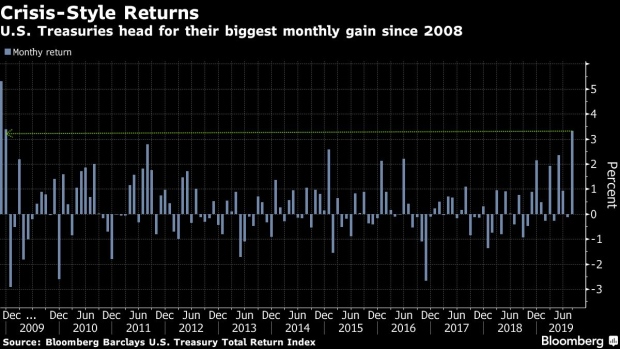 (Bloomberg) -- A chaotic month of trade warfare, recession fears and broadening political turmoil has set U.S. government bonds on track for their strongest monthly return since the heat of the 2008 crisis.

With just one more session to go until August’s market turmoil can be fully accounted for, the Bloomberg Barclays U.S. Treasury index has gained 3.33%, more than in any month since December 2008. It returned 3.39% that month as the Federal Reserve slashed interest rates by a further 75 basis points to stabilize the economy following the collapse of Lehman Brothers. The U.S. 10-year yield plummeted 71 basis points over the month, to 2.21%.

Concern that trade protectionism will hurt the U.S. economy has been a driving force of these late-summer moves, possibly exacerbated by thin trade. The yield curve is inverted, with the 10-year yield trading 2 basis points below the two-year, in a signal that’s preceded every recession since the 1960s. And declining European yields have pulled the U.S. market further along. The German 10-year fell to record lows near -0.73%, and the U.K. 10-year breached its 2016 lows, falling to 0.404%.

From this vantage point, possible catalysts abound for further volatility and Treasury gains in the months ahead. Hong Kong’s protests continue to escalate with police threatening more arrests. And while U.K. parliament may have no say in the matter, that’s hardly going to detract from turbulence in the lead-up to the Oct. 31 deadline for the U.K.’s exit from the European Union. In the immediate future, the next round of tariffs on Chinese goods are activated this weekend, and markets are prone to jumping at every turn in negotiations.

“If the experience of the last 421 days has been any guide, there is still room for things to get worse before they get better,” BMO strategist Ian Lyngen wrote in a note to clients Friday.

At least trading desks will be fully staffed and ready to spring into action next week. Expectations remain high that the Fed will come through with rate cuts should global economic risks seep into U.S. data. So far, Chairman Jerome Powell -- who is slated to speak in Zurich on Sept. 6 -- has offered no push-back to the market’s expectations for another 25-basis-point easing next month. And memories of the surge of volatility at the end of 2018 and increased market strains “will surely inform the FOMC’s mindset during the jaunt across the monetary policy tightrope on September 18,” Lyngen wrote.

To contact the editors responsible for this story: Benjamin Purvis at bpurvis@bloomberg.net, Elizabeth Stanton, Jenny Paris