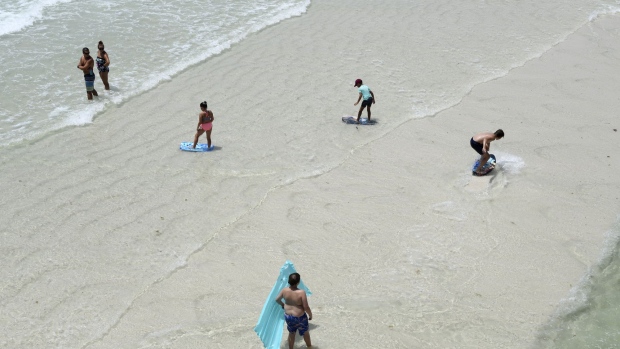 (Bloomberg) -- Many families across America would usually be packing up right about now, getting ready for that last summer getaway to the Caribbean or Europe before Labor Day and the traditional start of school. But the coronavirus pandemic has upended travel, while remote work and remote learning have blurred the boundaries of the summer high season.

Some have managed to take time off over the past few months, often avoiding airplanes and sticking closer to home—burning gasoline instead of jet fuel as they drove to beaches, state parks and lakes. Hotels have been out and recreational vehicles in; big city shopping trips have given way to camping and hiking.

“There’s this big giant ball of pent-up demand that keeps running into this wall of fear of the coronavirus,” said Amir Eylon, chief executive officer of the market research firm Longwoods International. “The mindset is shifting, and people are figuring out what’s the acceptable level of mitigated risk to travel.”

Now that the sultry, golden days of late August are upon us, the urge to get away can be overpowering—fear notwithstanding. But there’s a silver lining in this fraught, tragic time when mass transit and big hotels seem too big a risk. With many offices still closed and likely to stay that way, and remote working (and schooling) quickly becoming the rule, your vacation plans don’t have to end with August.

The pandemic, it turns out, may have permanently changed how the country takes a break.

Americans, understandably, want to get as far away from each other as possible right now, since preliminary research shows virus transmission is more likely to happen inside. As a result, this summer’s emphasis on the great outdoors seems likely to continue into the fall, travel industry experts said.

Lesser known national parks have been getting a lot of online search interest, said Whitney Scott, vice president of marketing at Kampgrounds of America (KOA). “People want to try and find something where it’s not going to be crowded, where they can feel safe and they can have some privacy and peacefulness,” she said.

About one-quarter of travelers have reported changing their plans so they could drive (rather than fly) to a holiday spot, according to Longwoods. But even then, there are travel restrictions to deal with, such as New York’s 14-day quarantine rule for arrivals from more than 30 states. Staying in your own state has become the path of least resistance—kind of like camping in your own backyard.

“It’s very safe to say that road-trip travel, at least for the next six to 12 months, is going to be the preferred method of travel,” Eylon said.

Hotel and motel occupancy near outdoor vacation destinations is in the mid-50%-range, compared with normal summer levels of 90%, said Chip Rogers, CEO of the American Hotel and Lodging Association. City hotels, by contrast, have barely recovered at all, he said.

“The urban markets continue to struggle,” Rogers said. “The secondary and tertiary markets—where you can drive to them and there are outdoor activities such as the beach, mountain hiking and things like that—they’re struggling, but doing a little bit better.”

American hotels were almost half-full for the week ending Aug. 8, according to data analytics company STR. The states with the highest occupancy rates were South Dakota, Montana and Idaho. The lowest were Hawaii and Washington, D.C.

Many Americans who would have opted for hotels in the past are now looking for a place to sleep that’s more, well, socially distanced. Recreational vehicle renting surged which, as national parks reopened, played right into the parallel jump in park and campground traffic. “Many of our campgrounds are having record years, even though they were closed for a couple of months,” said KOA’s Scott.

KOA, which has more than 520 campgrounds across North America, did a survey back in April that found respondents ranked camping as the safest form of travel. August is shaping up to be a great month for campgrounds, Scott said. KOA’s Scott said the campgrounds are equipped with WiFi, so families that are doing work and school remotely could do so from their RVs.

Motels and their outdoor walkways, long dismissed as a seedy, low-rent option, have been big winners. Now, wary travelers are looking for this airy alternative to the traditional hotel, with individual heating and cooling units, Rogers said. They often don’t require elevators, either.

Hotels aren’t losing out entirely to their motel brethren, though. Many have been betting on staycationers to fill rooms. The exact geographic limits of the term are debatable (Merriam Webster calls it “a vacation spent at home or nearby”). But people are interested in the concept nonetheless: “staycation” reached its highest point ever in Google search traffic this summer.

The flexibility brought on by the necessities of the pandemic have had an effect on the way people are scheduling their time away. Hotels are seeing bookings that would normally be limited to the weekend stretched into weekdays, signaling a new flexibility about when guests are traveling, AHLA’s Rogers said. He’s been talking with others in the industry about how to push September as a good time to travel.

But the money isn’t enough to keep the industry afloat for long. Jan Freitag, senior vice president of lodging insights at data analytics provider STR, is skeptical however that staycations are happening in strong enough numbers to make a significant difference. He noted that a key trend has been that economy-class accommodations are outpacing luxury options.

In Savannah, Georgia, Angela Freeman and her son went to a new hotel as a substitute for the cruise they had hoped to take. “I would have rather gone somewhere else,” Freeman said. “But it worked, we got away. It was nice, considering everything going on.” They were at the hotel for just one night, however.

Read More: Hotels Are Betting on Staycations to Survive Covid-19

With less travelers coming in, hotels have gotten creative about how to fill their rooms, at least during the day. Red Roof, a chain of more than 500 hotels, began offering rooms for rent during the day as office space for the first time. More than 1,800 rooms have been rented out for a day through the program. Dayuse, a platform that helps people find hotels to use for the day, saw more than 1,000 U.S. hotels requesting to join their platform since the pandemic began, said Head of Sales Mélanie Marcombe.

During the pandemic, hotel rooms offer a space to work outside of the homes (where people have been cooped up for months) that’s clean, has internet, doesn’t have coworkers breathing out potential virus particles across the desk, and gives professionals a break from the trappings—think children—that are distracting at home.

While they may be going to hotels, people aren’t traveling for business. With conventions cancelled and companies hesitant to send employees out, the effects could be particularly stark come October as leisure travel typically cools off. “That is becoming a significant pain point,” Rogers said.But 2020 isn’t a typical year, and the travel industry is hoping you stretch your vacation plans into the fall, and beyond.