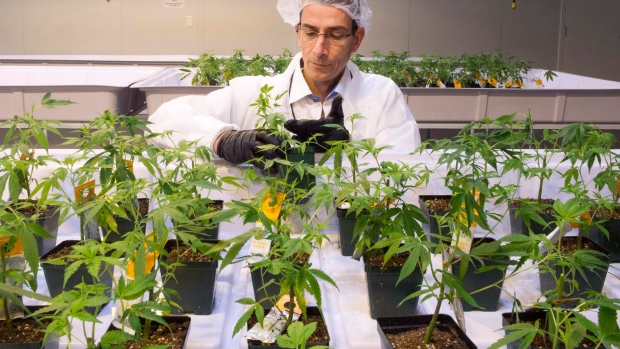 EDMONTON - Aurora Cannabis Inc. has signed a deal to buy a minority stake in Liquor Stores N.A. Ltd., which plans to launch a brand of marijuana retail outlets as Canada moves to legalize the drug for recreational use later this year.

Under the deal, the Edmonton-based licensed marijuana producer will acquire a 19.9 per cent stake in the liquor store operator for $103.5 million through a non-brokered private placement.

It will also have an ability to increase its interest in Liquor Stores up to 40 per cent with an additional investment.

"This will allow us the speed to market that we were looking for," said Aurora Cannabis' chief corporate officer Cam Battley. "It allows us to begin converting stores very, very quickly so that we will be ready on day one."

Alberta, where Liquor Stores has a vast retail footprint, is among the provinces which will allow private retailers to sell recreational cannabis when it is legalized in Canada this summer. Provinces such as Ontario and Quebec, however, have tasked the provincial liquor boards to handle retail sales of marijuana for adult use.

Liquor Stores, which operates 231 retail liquor stores in Western Canada and several U.S. states, plans to use the money to establish and launch a brand of cannabis retail outlets. The publicly-listed company has 178 locations in Alberta, 34 in British Columbia, and a presence in Alaska, Connecticut, New Jersey and Kentucky, according to Liquor Stores' 2017 information circular.

The retailer said Monday it will convert some of its existing stores into cannabis outlets and establish new locations.

Liquor Stores will also use a portion of the money to strengthen its existing liquor retail brands by renovating its existing outlets and for general corporate purposes.