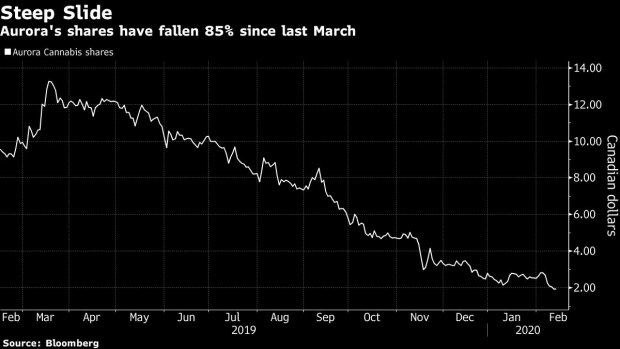 (Bloomberg) -- Aurora Cannabis Inc. is seeing interest in its CEO job from executives in the consumer packaged goods industry despite a significant amount of upheaval at the company, according to its interim leader.

“We’re seeing a lot of very talented individuals raising their hand and wanting to learn more,” Michael Singer, Aurora’s executive chairman and interim CEO, said in a phone interview. “I think some of them are intrigued by the fact that yes, we’ve taken a pause given the current market conditions, but the growth opportunity for Aurora is tremendous.”

He was “pleasantly surprised” by the people who’ve reached out since Aurora announced the retirement of CEO Terry Booth last week, along with 500 job cuts, C$1 billion in writedowns and a reduction in its credit facility. That was followed by earnings Thursday that showed quarter-over-quarter declines in most metrics.