U.S. equities tumbled alongside stocks in Europe and Asia as authorities struggled to keep the coronavirus from spreading more widely outside China. Havens including Treasuries and gold surged.

In a dramatic day across markets, these were some of the standout moves:

• All three main U.S. stock benchmarks slumped more than three per cent, with the S&P 500 Index tumbling the most on an intraday basis since August. The Dow Jones Industrial Average erased all of its gains for the year.

• The FANG cohort of megacap tech shares that led the year’s rally plunged more than four per cent. AMD Corp. led losses in chipmakers exposed to China, at one point sinking more than 10 per cent. High-flyers Virgin Galactic and Tesla each fell about seven per cent. Alpha Pro Tech, maker of protective clothing and masks, surged 15 per cent.

• The Stoxx Europe 600 Index slid 3.8 per cent on trading volumes well above average for the largest drop since 2016 as investors fled travel and luxury-goods shares. A gauge of credit risk on the region’s high-yield companies jumped.

• South Korea’s benchmark dropped 3.9 per cent, leading declines across Asia, though Japan’s markets were shut for a holiday.

• Spot gold approached US$1,700, while Brent crude oil tumbled about five per cent.

The risk-off mood hardened as the epidemic spread to more than 30 countries, with South Korea reporting a jump in infections and Italy locking down an area of 50,000 people near Milan. Finance chiefs and central bankers from the largest economies warned this weekend that they saw the virus bringing downside risks to global growth. 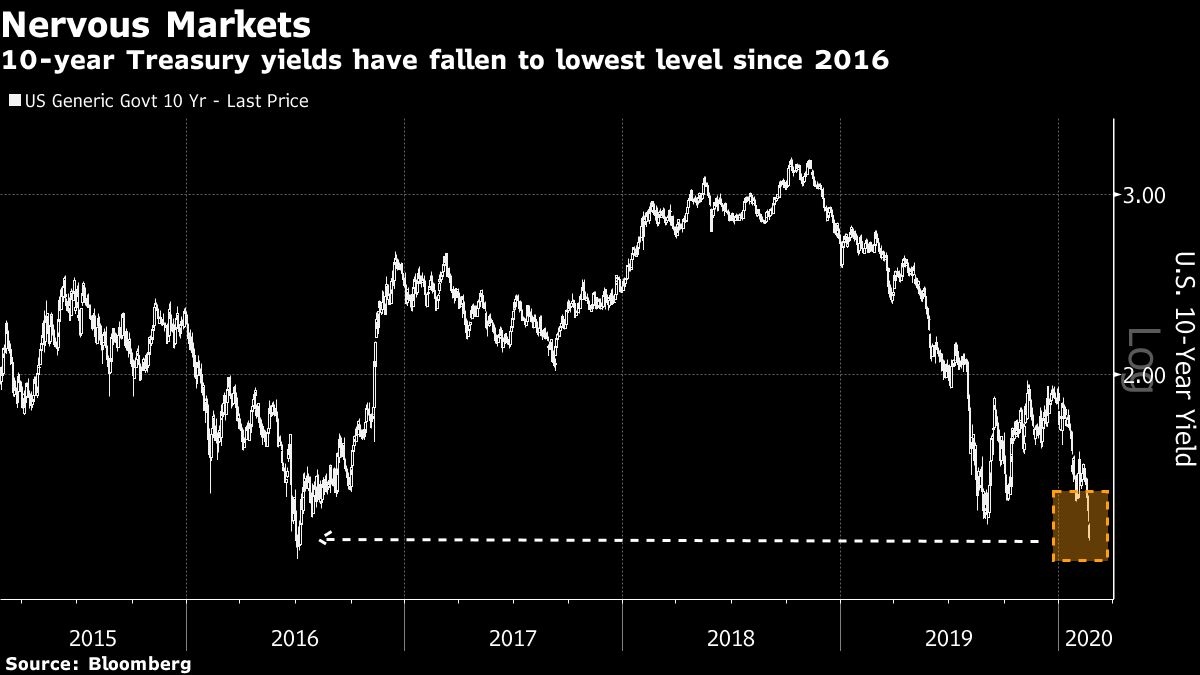 “Stock markets around the world are beginning to price in what bond markets have been telling us for weeks — that global growth is likely to be impacted in a meaningful way due to fears of the coronavirus,” said Chris Zaccarelli, chief investment officer for Independent Advisor Alliance.

Governments and companies are curbing travel and trade in an attempt to contain a novel pathogen that can be transmitted by people without symptoms. Today’s market moves follow on last week’s surge into havens after fresh warnings by companies over the potential impact of the virus on business and global supply chains. Adding to the anxiety Monday was China announcing an easing of the quarantine of Wuhan, only to retract the statement hours later.

“Markets hate uncertainty and the coronavirus represents the most uncertain macro risk markets have faced in years,” said Alec Young, managing director of global markets research at FTSE Russell. “Investors are also acutely aware that many misjudged the economic severity of the virus early on, making them more open to entertaining worst-case scenarios now.”

Elsewhere, Italian bonds dropped on concern that the spread of the coronavirus may push the economy into a recession. The Australian dollar weakened to an 11-year low and the offshore yuan held most of last week’s decline.

These are some key events coming up:

• The Democratic presidential debate in South Carolina is on Tuesday.

• The Bank of Korea announces its policy decision on Thursday, with risks to the outlook growing amid a surge in coronavirus cases.

• Japan industrial production, jobs, and retail sales figures are due on Friday.

• The Dow Jones Industrial Average sank 3.3 per cent to 28,044, the lowest in almost 11 weeks on the biggest tumble in about two years.

• The Nasdaq Composite Index decreased 3.6% to 9,232.79, the lowest in more than three weeks on the largest tumble in almost 15 months.

• The MSCI All-Country World Index sank 2.8 per cent to 556.44, the lowest in more than 10 weeks on the biggest tumble in about two years.

• The Japanese yen strengthened 1.1 per cent to 110.37 per U.S. dollar, the biggest jump in about seven months.

• The yield on U.S. 10-year Treasuries decreased 11 basis points to 1.36 per cent, the lowest in more than three years on the biggest tumble in more than six months.

• The yield on U.S. 30-year Treasuries dipped 10 basis points to 1.82 per cent, the lowest on record with the largest dip in almost 12 weeks.

• Germany’s 10-year yield declined five basis points to -0.48 per cent, the lowest in almost 20 weeks on the biggest decrease in more than seven weeks.

• Britain’s 10-year yield declined three basis points to 0.54 per cent, hitting the lowest in three weeks with its fifth straight decline and the largest drop in more than two weeks.

• Gold strengthened 1.8 per cent to US$1,672.69 an ounce, reaching the highest in about seven years on its fifth consecutive advance and the biggest surge in six months.

• Copper fell 1.1 per cent to US$2.59 a pound, the lowest in two weeks on the largest fall in more than two weeks.

• West Texas Intermediate crude sank 4.9 per cent to US$50.75 a barrel, the lowest in almost two weeks on the biggest tumble in about seven months.