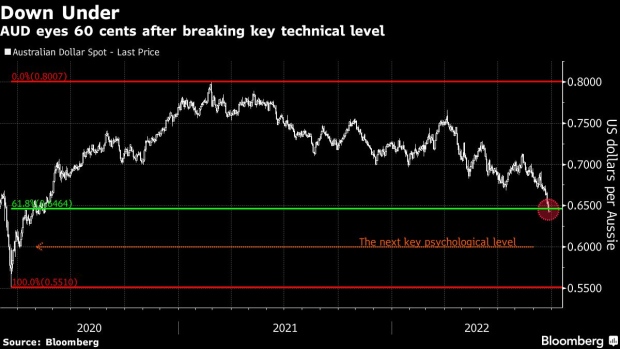 An Australian one hundred dollar banknote is arranged for a photograph in Sydney, Australia, on Wednesday, May 23, 2018. Australia's central bank chief Philip Lowe said last week that his nation and China together can be a force supportive of an open global trading system. Photographer: Brendon Thorne/Bloomberg , Bloomberg

(Bloomberg) -- The Australian dollar may fall to its weakest level against the greenback since markets were ravaged in the early days of the pandemic, after breaking key technical and psychological supports.

The currency closed under 64.64 US cents for a second day on Tuesday, a level that marks a 61.8% Fibonacci pullback of its March 2020 to February 2021 rally. Further declines could see the Australian dollar fall toward 60 US cents, unwinding the remainder of that advance.

The Aussie has slumped 11% against the greenback this year and dropped below the psychological 65 US cents level as the dollar rallied on bets the Federal Reserve will aggressively raise interest rates and as traders sought haven assets in anticipation of a potential recession. The currency has also weakened because of concern over slowing growth in China, Australia’s largest trading partner.

“The tumult in global financial markets, lower metal prices, higher volatility and the weakening world economic outlook are weights on the Australian dollar,” Joseph Capurso, head of international economics at Commonwealth Bank of Australia, wrote in a note to clients. CBA expects the currency to fall to 62 cents early next year.

Read More: Something is Going to Break as Stresses Pile Up: Everything Risk