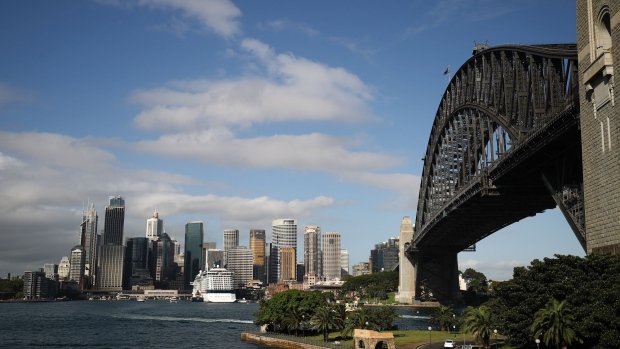 The Celebrity Solstice cruise ship, operated by Celebrity Cruises Inc., center left, sits moored at the Overseas Passenger Terminal as Sydney Harbor Bridge and commercial and residential buildings stand in the central business district in Sydney, Australia, on Thursday, April 13, 2017. The Australian economy will expand 2.5 percent in 2017, 2.8 percent in 2018 and 2.6 percent in 2019, according to a survey conducted by Bloomberg News. Photographer: Brendon Thorne/Bloomberg , Bloomberg

The proceeds -- about seven times more than what the company raised last year -- will be used to expand in markets including the U.S., and to double the firm’s staff to 400 by the end of next year, according to Angus McDonald, co-founder and chief executive officer of Cover Genius.

“We have signed 20 new partners over the last six months all around the globe and we need to be able to grow our team,” McDonald said in an interview ahead of the fundraising announcement. Retailers EBay Inc. and Wayfair Inc., travel booking website Skyscanner Ltd. and Intuit Inc., which provides software like TurboTax and QuickBooks to small businesses, are among its partners and the business is already profitable, McDonald said.

Cover Genius’s latest fundraising is among the biggest by an Australian fintech company, after Airwallex Cayman Ltd.’s $200 million raise this month. G Squared, which counts Lyft Inc., 23andMe, Inc., and Spotify Technology SA in its portfolio, also invested in that funding round.

Investors have been hungry for fintech businesses this year after the pandemic accelerated a shift to digital. Airwallex raised two rounds of funding in the space of six months, while in the public markets, Square Inc., the digital-payments platform led by Twitter Inc. founder Jack Dorsey, agreed to acquire Australian buy now, pay later company Afterpay Ltd. for $29 billion in August.

Cover Genius, founded in 2014 in Sydney by McDonald, 44, and his university friend Chris Bayley, 45, started out selling travel insurance before expanding into property, shipping and e-commerce warranties through its growing network of partners. Bayley previously worked as a business development manager for Google Inc. in Australia, while McDonald was an executive at Yahoo! Inc.

Cover Genius is licensed to provide insurance in more than 60 countries and has 200 staff across cities including New York, San Francisco, London, Amsterdam, Tokyo and Singapore.