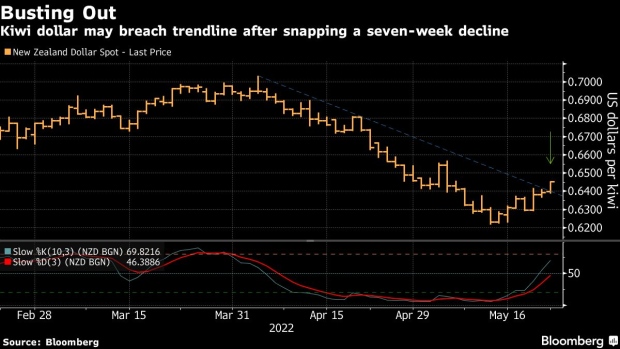 The risk sensitive Australian and New Zealand dollars climbed to their highest levels in several weeks as a rally in U.S. stock futures bolstered risk appetite among investors.

The Australian dollar rose 0.7% to 70.92 US cents, while the kiwi jumped 1.1% to 64.62 cents, the highest since May 5. Leveraged funds scooped up both currencies, triggering a short squeeze, traders said.

The more upbeat mood in equities markets is boosting risk-sensitive currencies such as the Aussie and kiwi while havens including the US dollar struggle, said Sean Callow, senior currency strategist at Westpac Banking Corp. The kiwi has also “outperformed in the past few sessions, which may be a sign of positioning ahead of the RBNZ decision” this week, he said.

The Reserve Bank of New Zealand is scheduled to announce its monetary policy decision on Wednesday with the median of a survey of economist forecasts showing a 50 basis point rate increase to 2%.

The rally helps to erase some of the losses posted by the Aussie and kiwi this quarter, although the two currencies remain among the worst performers among the Group-of-10. Worries about aggressive US rate hikes and China’s Covid outbreak continue to weigh, and the market may reverse course if the concerns intensify.