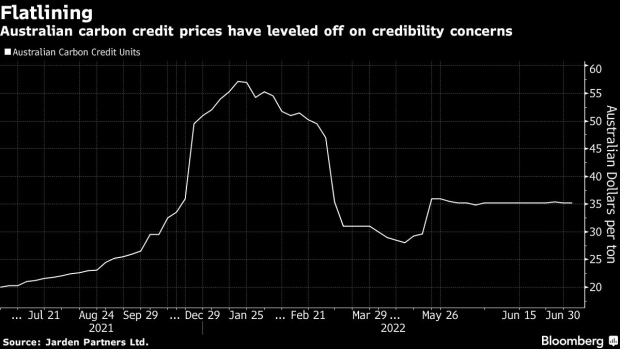 Vapor rises from cooling towers at the AGL Energy Ltd. Loy Yang Power Station in the Latrobe Valley, Australia, on Tuesday, Oct. 26, 2021. Australia’s Prime Minister finally agreed to a plan to zero out its carbon emissions by 2050, but said he wouldn’t enshrine the target in law, and would continue to rely on fossil fuels and projects designed to offset planet-warming pollution. Photographer: Carla Gottgens/Bloomberg , Bloomberg

(Bloomberg) -- Australia’s new government announced an independent review of the nation’s carbon credit system to address concerns over its integrity.

Former chief scientist Ian Chubb will lead a six-month review of Australian Carbon Credit Units, Climate Change and Energy Minister Chris Bowen said Friday. The Labor government, which came to power in May after a climate-focused election, sees enormous potential for carbon markets to help Australia meet its recent commitment to a goal of cutting emissions by 43% from 2005 levels by 2030, he said.

The announcement was welcomed by the Australia Institute, a think tank that supports pro-climate action, which said a review of the A$4.5 billion ($3.1 billion) carbon credits system would help ensure that they actually reduce emissions.

“Integrity must sit at the heart of Australia’s climate policies,” Richie Merzian, director of the Australia Institute’s climate & energy program, said in a statement. “Carbon credits with integrity can play a role in Australia’s net zero future, but dodgy credits that are not additional or real abatement are effectively a license to pollute and are only further fueling climate change.”

ACCUs are issued by the Emissions Reduction Fund and are largely generated by the land sector through sequestration projects. Andrew Macintosh, a former chairman of the country’s Emissions Reduction Assurance Committee, said in March that the system was a fraud and a waste of taxpayer money, and that as many as 80% of carbon credits issued didn’t offer genuine or additional abatement of greenhouse gas emissions.

“The Review Panel will consider these concerns by examining the governance arrangements and legislative requirements, the integrity of the key methods used and the broader scheme settings that affect the integrity of ACCUs,” Bowen said Friday. “A strong carbon crediting system will encourage more organizations to take steps to reduce their emissions, help Australia meet its emissions reduction targets and better support our regional economies.”