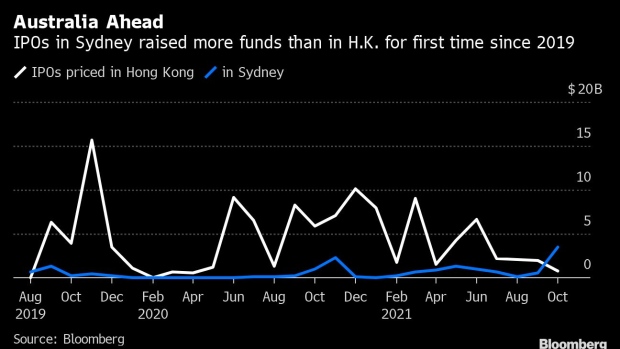 A paddler in Sydney Harbour and the skyline of the central business district (CBD) in Sydney, Australia. in Sydney, Australia, on Tuesday, Sept. 28, 2021. Australian household spending declined for a third consecutive month as the delta variant of coronavirus swept the east coast and nation’s largest cities. , Bloomberg

(Bloomberg) -- The market for initial public offerings in Sydney has been on a tear, with the amount of deals priced last month surpassing that in Hong Kong for the first time in over two years.

Twenty companies raised a total of about $3.5 billion in Australia in October, the highest monthly value since November 2014. That compares with $732 million booked in three deals in Hong Kong, the lowest amount for a month since April 2020.

Australia’s strong performance is likely to continue, as the fourth quarter is usually the busiest for IPOs in the country. Several big-ticket deals are already in the pipeline, with infrastructure services provider Ventia Services Group Pt seeking to raise as much as $900 million. Australia’s border reopening this month will also see business and the economy pick up.

In contrast, in Asia’s traditional financial hub Hong Kong, big first-time offerings have almost entirely vanished since early July, when China widened a regulatory crackdown over industries ranging from tech and property to education. The benchmark Hang Seng Index is one of the world’s worst performers this year and a tech rebound lost steam last week.