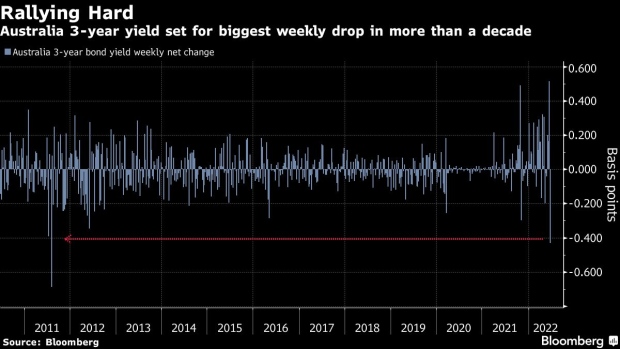 Pedestrians are silhouetted as they walk along a sidewalk at Circular Quay in Sydney, Australia, on Friday, Jan. 11, 2019. Australian consumer confidence slumped the most in more than three years, amid pessimism over falling property prices and economic growth, after the nation's dollar tumbled to the weakest in almost 10 years at the beginning of the month. Photographer: Lisa Maree Williams/Bloomberg , Bloomberg

Australia’s bonds have whipsawed this month after the RBA raised rates more than economists forecast and Governor Philip Lowe said policy makers would do what’s necessary to bring inflation down. The 10-year bond yield rose to 4.26% last week, the highest since January 2014, before tumbling as investors feared the pace of central bank hikes will push economies into recession.