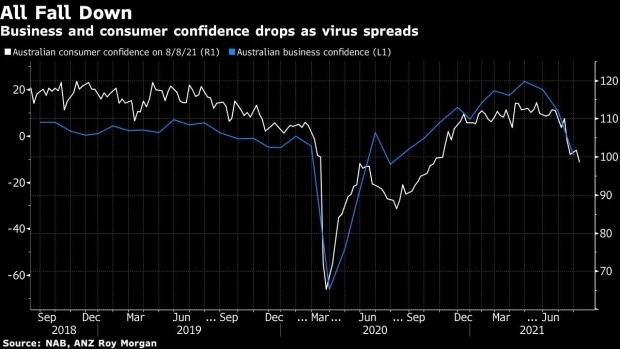 Tradesmen cross a near-empty street in Sydney, Australia, on Monday, Aug. 2, 2021. Sydney’s lockdown has been extended three times times and there is a risk it won’t be lifted as currently scheduled on Aug. 28, given delta’s continued spread and Australia’s vaccination program that has lagged many other major economies. Photographer: Brent Lewin/Bloomberg , Bloomberg

(Bloomberg) -- Australian business sentiment tumbled in July as Sydney’s outbreak of the delta strain of coronavirus forced even tighter stay-at-home orders and leaks of the virus prompted snap lockdowns in other major cities.

Business confidence slumped to minus-8 points from plus-11 in June, National Australia Bank Ltd. said in a statement Tuesday. The conditions index -- measuring hiring, sales and profits -- dropped to 11 points from a revised 25. The survey ran from July 20-30.

The result showed “optimism collapsing on the back of ongoing restrictions,” said Alan Oster, chief economist at NAB. “The fear is that lower capacity utilization and a fading pipeline on work may see businesses pull back on hiring and investment intentions.”

The highly contagious delta variant has caused shutdowns across Australia’s east coast, the nation’s most populated area, with Sydney now in its seventh week of lockdown. The central bank estimates household spending tends to drop about 15% during lockdowns and expects the economy will likely contract this quarter.

“We know that once restrictions are removed that the economy has tended to rebound relatively quickly,” Oster said. “The hope is that the economy again rebounds strongly, and we see little pullback in the very positive investment and hiring intentions we have seen by business in recent months.”

Reserve Bank chief Philip Lowe signaled last week that he’s adopting a similar outlook, pushing ahead with a planned taper of bond purchases in the expectation there will be a rapid recovery. In addition, the governor maintains that fiscal policy is the best tool for aiding households during such episodes -- and federal and state governments have boosted assistance.

Australian authorities are trying to ramp up vaccinations to counter the outbreak after a sluggish roll out left the population vulnerable to delta.