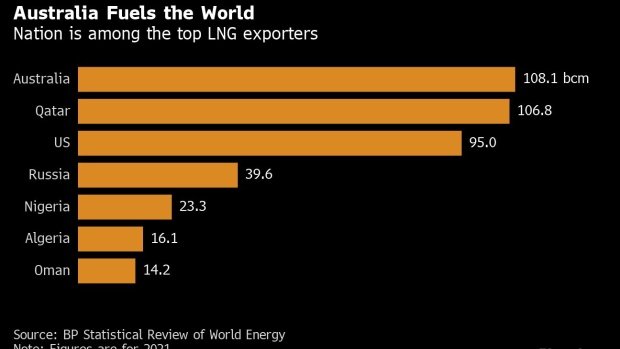 (Bloomberg) -- Australia will impose a cap on domestic energy prices and provide as much as A$1.5 billion ($1 billion) in energy bill relief to ease cost of living pressures caused by soaring global commodity prices.

Domestic natural gas prices will be capped at A$12 a gigajoule and thermal coal prices will be limited to A$125 a ton for 12 months, Prime Minister Anthony Albanese said Friday, following a meeting with state government leaders. The government will provide bill relief to households, which will be administered through local authorities.

“Extraordinary times call for extraordinary measures,” Albanese said, citing Russia’s invasion of Ukraine as a key cause of rocketing commodity prices. The government will compensate energy producers if their cost of production exceeds the caps, though the measures would vary from state to state, he said.

Supply of natural gas would be guaranteed under an agreement the government signed with liquefied natural gas plants that include Shell Plc, ConocoPhillips and Santos Ltd. as partners in September, the prime minister said. Exports of liquefied natural gas from Australia — one of the world’s leading suppliers — won’t be impacted, he said.

“One of the things that we were very careful of doing was to not interfere with any of the existing export systems that are in place,” Albanese said. “With regard to existing — be it gas or coal contracts overseas — this will have no impact on it.” Gas consumers including Japan had previously raised concerns over the prospect of disruptions to supply.

The center-left Labor government’s budget in October revealed electricity prices are expected to increase at least 50% by June 2024, and gas prices are forecast to rise more than 40% over the same period.

“A gas price cap will force prices higher for households and businesses because it will kill investment confidence and reduce future supply,” Samantha McCulloch, chief executive officer of the Australian Petroleum Production & Exploration Association, an industry group that counts Chevron Corp. and BP Plc among its members.

Albanese’s announcement follows weeks of negotiations over what type of intervention to take. The leader and Treasurer Jim Chalmers have been reluctant to impose windfall taxes similar to those announced by the UK and other European nations, even as Australia’s LNG producers are posting unprecedented profits after international prices surged.

Western Australia, which houses half of the nation’s 10 multibillion-dollar export facilities, has escaped the knock-on effects of surging international prices because of the state’s gas reservation policy. Officials have urged other regions to adopt a system similar, under which exporters must make 15% of their production available locally.