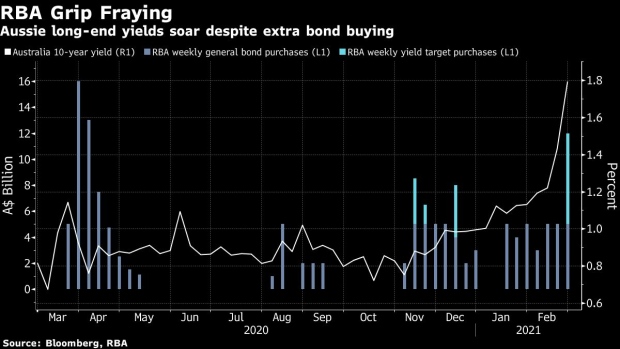 A pedestrian crosses a street in The Rocks area of Sydney, Australia, on Tuesday, Oct. 13, 2020. Australia last week released a fiscal blueprint that pushes debt and deficit to a peacetime record just hours after the central bank signaled a willingness to ease further as both arms of policy press to drive down unemployment. Photographer: Bloomberg/Bloomberg , Photographer: Bloomberg/Bloomberg

Australia’s central bank signaled it will not shirk from its yield target and quantitative easing programs designed to hold down borrowing costs and keep a lid on the currency. Yet, the bond market shows no indication of taking a backward step.

Reserve Bank Governor Philip Lowe and his board are likely to focus Tuesday’s meeting on their response to a global reflation trade that’s proving a major challenge for central banks. Australia shifted to the forefront of the market action as a commodity powerhouse with a rapidly recovering economy; a combination that’s driven its currency up around 80 U.S. cents.

The RBA is expected to maintain its broad settings: a key interest rate and three-year bond yield target at 0.10% and a A$100 billion ($78.4 billion) QE program for longer-dated securities. It surprised last month by announcing a second round of QE when the current tranche expires in mid-April. It could tweak its buying plans tomorrow.

“Markets will be looking for a firm response to the extreme bond market volatility,” said Su-Lin Ong, head of Australian economic and fixed-income strategy at Royal Bank of Canada. “At a minimum, we would expect a step up in yield-curve control for the next couple of weeks, possibly including more purchases on non QE operation days.”

The RBA -- following a more than two-month hiatus in defending its yield target -- re-entered the market last Monday with a A$1 billion buy that failed to leave a dent. It followed up Thursday with A$3 billion and when yields still pushed higher, executed a further A$3 billion Friday.

Bond markets are pricing in accelerating inflation on expectations of a rapid global economic recovery that will leave central banks unable to maintain loose settings. Policy makers have pushed back, with Jerome Powell signaling the Federal Reserve was nowhere near close to pulling back support for the U.S. economy.

But with trillions of dollars sloshing around economies courtesy of central bank infusions plus vast fiscal programs, amid vaccination roll out, rising price pressure may be on the horizon.

Australia is facing further pressures as a commodity powerhouse with iron ore, its largest export, surging through $170 a ton last week, approaching records set more than a decade ago during China’s construction frenzy.

“While sizable, the RBA’s purchases are missing the mark when it comes to containing key 3-year yield benchmarks. We think the lift in the 3-year futures yields increases the risk the RBA redirects as much as A$5-6 billion of purchases towards the November 2024 bond over coming weeks.”

Australia has recovered rapidly from the virus due to its success in limiting Covid-19’s spread to isolated flare-ups. Household and business confidence are strong, boosting activity and hiring, with the jobless rate falling to 6.4% in January from a pandemic peak of 7.5%.

Gross domestic product probably surged 2.3% in the final three months of last year from the prior quarter, economists estimate ahead of data Wednesday. It likely fell 2% from a year earlier, with GDP not expected to return to pre-pandemic levels until mid-year.