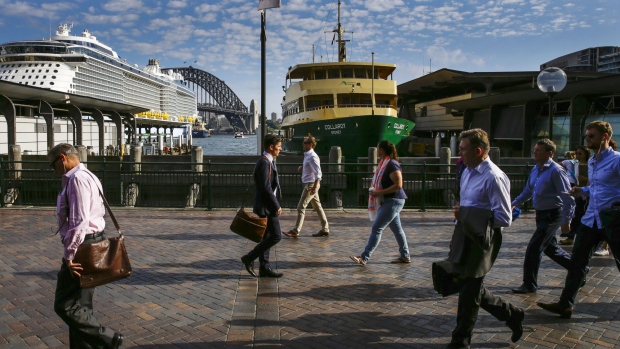 Commuters walk past a ferry docked at the Circular Quay wharf as Royal Caribbean Cruises Ltd.'s Ovation Of The Seas cruise ship, left, and the Sydney Harbor Bridge stand in the distance in Sydney, Australia, on Monday, Jan. 23, 2017. Australia is leading a push to salvage a Pacific trade deal after U.S. President Donald Trump formally withdrew as a signatory to the 12-nation accord. Photographer: DALLAS KILPONEN/Bloomberg , Bloomberg

(Bloomberg) -- Australia is keeping an open mind on a central bank digital currency, a senior Reserve Bank official said, while adding it remains to be convinced there’s a case for one in a country with easy financial and cash access.

RBA Assistant Governor Brad Jones laid out the pros and cons of a CBDC in a speech in Sydney on Thursday, saying a digital currency could enhance the resilience of the money and payment systems, particularly as disruptions from extreme weather events become more common.

“And cyber-induced disruptions represent a universal risk from which Australia is not immune,” he said.

Jones also highlighted the most significant concerns around CBDCs for Australian policy makers:

He pointed out that 60% of Australia’s banking system funding is from low-cost deposits, saying there is a risk of a CBDC becoming the preferred source of liquidity holdings for households in normal times.

While the threat is not unique to Australia, Jones said, such an outcome would disrupt monetary policy transmission and could damp banks’ ability to lend and build capital buffers.

“The bottom line here is that much will depend on CBDC design choices, and there are many complex issues that would need to be carefully weighed ahead of any decision to proceed with issuing a CBDC,” Jones said.