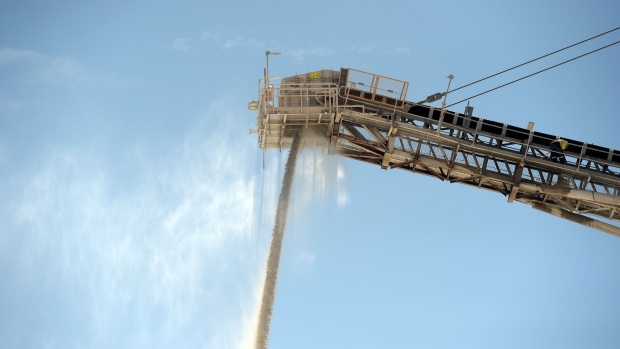 Lithium ore falls onto a stockpile at the Pilbara Minerals Ltd. Pilgangoora project in Port Hedland, Western Australia, on Friday, July 29, 2022. The highest bid for material at an auction run by Australia's Pilbara Minerals dropped for the first time since the exchange was launched last year. , Bloomberg

(Bloomberg) -- Australia is poised to grab a fifth of the world’s lithium hydroxide refining capacity within five years as demand grows for battery metals that bypass China, Canberra said in a report.

China produces more than 80% of the world’s lithium hydroxide, a processed form of the in-demand metal, according to the International Energy Agency. However, several companies are building refineries in Australia that would turn locally-mined lithium ore into battery-grade chemicals.

If these plans progress on time Australia could have 10% of the refining market by 2024 from a negligible amount currently, and 20% by 2027, the government said in a report released Tuesday. But delays and technical issues could derail the timeline, it warned.

Australia is the world’s biggest producer of the raw form of the metal that’s vital to the electric vehicle industry, supplying just under half of global demand. Most of that is sent to China as hard rock ore, where it’s refined into battery-grade lithium hydroxide.

Asia remains the biggest market for Australian lithium, but demand is growing in Europe and the US as carmakers there accelerate the switch to EVs, the government said in the report. It cited President Joe Biden’s landmark climate legislation, the Inflation Reduction Act, as a driver of refining in Australia. The IRA grants tax credits on EVs, but requires 50% of materials to be produced either in the US or from a country with a US free trade agreement.

The IRA is likely to boost Australia’s lithium sector, BloombergNEF said in a report on Tuesday, pointing to recent announcements by South Korean battery maker SK On Co. and Japan’s Prime Planet Energy & Solutions Inc. that they planned to increase investment in the country.

Lithium is on track to become the Australia’s fifth-most valuable export commodity, surpassing beef and wheat, and on par with copper and crude oil, the government said. Exports of the battery metal are forecast to reach A$13.8 billion ($8.9 billion) this financial year, a more than tenfold rise over two years.

Most of the growth in export revenue is due to surging prices, which have doubled since the beginning of the year as carmakers around the world scramble to secure enough to meet ambitious EV targets, the government said. Lithium ore prices are projected to more than quadruple this year, it said.

Increased output will also drive the sector’s earnings, with Australian lithium production expected to more than double over the next five years. Still, it remains a small export industry next to the three biggest export sectors: iron ore, coal, and liquefied natural gas will together earn A$329 billion in revenue this year, the government forecast.

(Updates with par from BNEF report in 8th paragraph.)