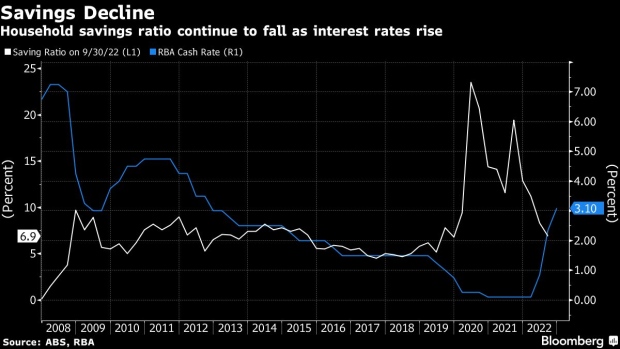 (Bloomberg) -- Australia’s economy expanded at a slower than expected pace in the three months through September as imports jumped, reflecting ongoing strength in household spending and resilience to the Reserve Bank’s interest-rate increases.

Gross domestic product advanced 0.6%, down from 0.9% in the second quarter and just below economists’ estimate of 0.7%, official data showed Wednesday. From a year earlier, the economy expanded 5.9% versus a forecast 6.3%. That was still stronger than the five-year average annual GDP growth of 4.2% prior to the pandemic.

The slower than forecast result sent Australian three-year government bond yields down as much as 3 basis points immediately after the data before reversing that move. They traded at 3.07% at 12:12 p.m. in Sydney.

Today’s data is a snapshot of the economy in the rearview mirror and spans a period when the RBA delivered a series of half-percentage point rate rises to counter spiraling consumer prices. GDP has been bolstered by consumption as Australians built up savings of more than A$200 billion ($135 billion) during the pandemic.

“Spending on discretionary items grew at a healthy pace although momentum has slowed as the sugar-hit from re-opening the economy has faded,” Sean Langcake, head of macroeconomic forecasting for BIS Oxford Economics.

“Higher interest rates and price inflation will continue to curb spending growth in the coming quarters,” he said. “The scope for consumers to fund growth in consumption from savings is dwindling quickly.”

For the RBA, the report validates its decision to slow the pace of policy tightening in October after delivering four consecutive quarter percentage-point hikes from June to September.

The central bank has hiked by 3 percentage points since May to take the cash rate to a 10-year high of 3.1% as it tries to rein in inflation that’s forecast to hit 8% in the current quarter.

Money markets are pricing in a key rate of 3.6% by mid-2023, which is also the median estimate of economists. Yet most observers expect the economy to keep growing, albeit at a slower pace. That contrasts with mounting concerns about recession in the US and other advanced economies.

“A sharp slowdown is in prospect for 2023 as high inflation and rising interest rates impact,” said Andrew Hanlan, a senior economist at Westpac Banking Corp.. “There is already some evidence of the adverse impacts of these powerful headwinds — notably weak retail sales.”

Figures out last week showed retail sales declined for the first time this year in October. Consumer sentiment is in the doldrums and business confidence is sliding too. Prices of Australia’s key exports — iron ore, coal and gas — have also come off from very high levels.

A fading boost from Australia’s reopening this year, rising services imports as holidaymakers head abroad and an expected slowdown in consumption in a high inflation environment are likely to cap growth in the period ahead, economists say.

Governor Philip Lowe has expressed confidence the economy can avoid recession despite the RBA delivering its sharpest annual tightening since 1989. The central bank’s forecasts show GDP growth slowing to 2.9% at the end of this year, then to 1.4% in 2023 and 2024 due to higher borrowing costs.