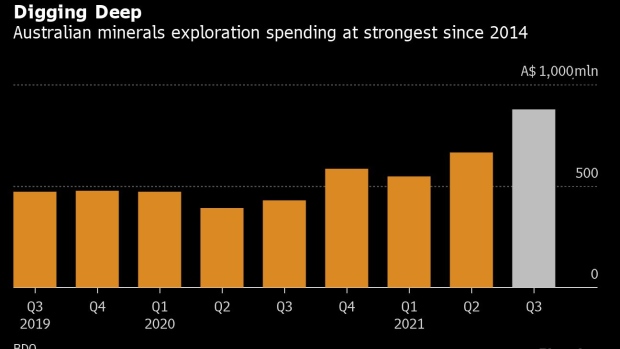 (Bloomberg) -- The hunt for metals critical to the clean-energy transition has seen spending on minerals exploration in Australia surge by nearly a third in the September quarter to a seven-year high.

Spending was A$877 million ($618 million) in the three months to Sept. 30, up from A$666 million in the June quarter, according to a report by business advisory firm BDO. The rise continued the revival in investment from a trough in 2016, driven by surging prices for battery metals such as copper, nickel and lithium.

While gold continued to attract the most investment dollars, battery metals were a strong growth area, Sherif Andrawes, BDO’s global head of natural resources, said in a phone interview. “It’s clear there’s demand from investors to put money into those commodities in anticipation of the energy transition.” There was also growing evidence of supply shortages in those metals, he said.

Five of the 10 biggest mining capital-raisings on the Australian exchange over the September quarter came from companies developing lithium or cobalt resources -- metals used in batteries for electric vehicles and renewable energy storage that are in high demand and short supply. A report by Barclays Plc earlier this month said Australia had “great potential for broadly untapped resources” in nickel and cobalt.

BDO also noted a pickup in acquisitions in the September quarter. Among the major deals announced in recent months, Newcrest Mining Ltd. agreed to buy Canadian gold producer Pretium Resources Inc. for about $2.8 billion, while South32 Ltd. will pay $1.55 billion for a stake in a copper project in Chile.

“We are starting to hear from some of our clients about strategic transactions being contemplated for the start of next year, indicating that the sector is now considering using their newly-raised cash towards M&A activity,” the report said. There was also a growing trend toward mining companies spinning off non-core assets via initial public offers, Andrawes noted.

While strong metals prices are helping underpin the growth in investment, the industry faces headwinds. The jump in exploration spending partly reflected a rise in mining costs for labor, drilling and equipment hire, the report said.

“That’s going to be a pressure point for explorers,” Andrawes said. The ramp up in activity meant increased competition for skilled labor and mining services -- something the industry would have to contend with in its efforts to find new resources.