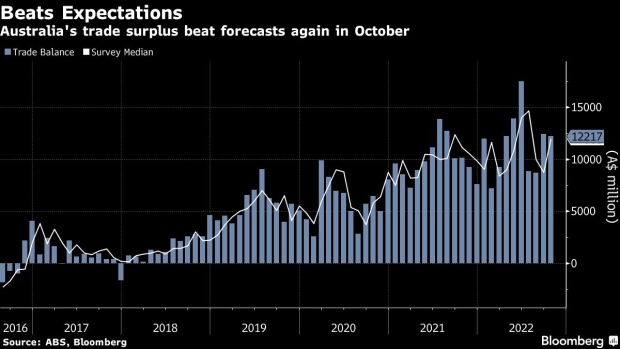 (Bloomberg) -- Australia is on track to record a fifth consecutive year of trade surpluses as October data showed ongoing strength in natural gas and metals shipments, driven by higher prices.

The windfall came in at A$12.2 billion ($8.2 billion) compared with A$12.4 billion in September and slightly exceeding economists’ estimates of A$12 billion, Australian Bureau of Statistics data showed Thursday. Both overall exports and imports edged down by 1% in October.

Australia has posted monthly trade windfalls since January 2018, underpinned by sales of iron ore and natural gas. The nation is also a major exporter of commodities like wheat that have also advanced amid concerns that war-ravaged Ukraine would be unable to ship its harvest.

The gains have aided Australia’s budget outlook, with both its debt and deficit position among the best in the developed world. Treasurer Jim Chalmers has highlighted though that in the case of elevated energy prices, what’s good for national income is bad for households as it drives up costs and inflation.

Today’s trade report showed the value of mineral fuels, which includes natural gas, climbed 2.6% in the month, while metals surged 6.1%.