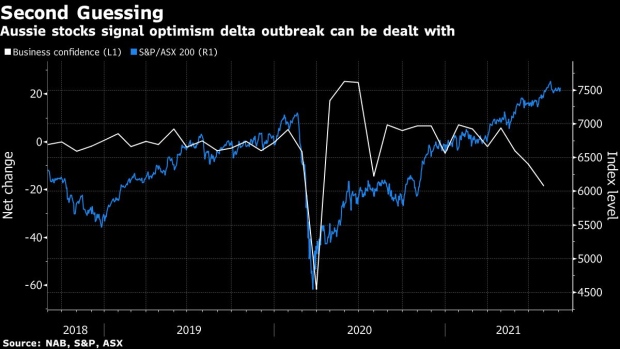 Pedestrians at promenade, opposite the Sydney Opera House, are reflected in a building at The Rocks in Sydney, Australia, on Monday, Aug. 30, 2021. Sydney had a record number of Covid-19 infections, accounting for the bulk of cases in New South Wales as Australia’s most populous state battles to contain the spread of the highly infectious delta variant. Photographer: Brendon Thorne/Bloomberg , Bloomberg

(Bloomberg) -- Australia’s central bankers are set to revisit the question of whether to delay a planned taper of bond purchases as a worsening outbreak of the delta variant dims prospects of a rapid economic rebound.

Ten of 16 economists surveyed by Bloomberg expect the Reserve Bank of Australia will defer scaling back quantitative easing on Tuesday. That’s despite Governor Philip Lowe saying after August’s meeting that the impact of such a move wouldn’t help the economy much and that the government was better placed to offer support.

“The governor argued strongly in favor of the taper plan last month on the grounds that additional QE would largely impact 2022 growth – which still looks likely to be strong – and that fiscal policy was more appropriate,” said Andrew Boak, chief economist for Australia at Goldman Sachs Group Inc. “Both these arguments remain as valid as they were a month ago.”

At its previous meeting in August, the RBA held on to its plans to scale back weekly bond purchases from September to A$4 billion ($3 billion) from A$5 billion.

While the economy has since weakened from lengthy lockdowns, the global backdrop provides some cover for the RBA sticking to its decision again. The Federal Reserve and the European Central bank are signaling a cautious winding back of stimulus later this year.

Yet the RBA also said in minutes of its August meeting that it was prepared to respond if further bad health news led to a “significant setback” for the recovery. The question is whether the latest developments meet that condition.

What’s changed in the interim is virus strategy. New South Wales and Victoria states, accounting for about 55% of gross domestic product and both largely locked down, are aiming to vaccinate their way out of the delta crisis rather than drive cases back to zero.

That suggests a more gradual lifting of restrictions as opposed to broad-based removals that allowed a V-shaped economic recovery through late 2020 and early 2021.

Economists estimate the economy will shrink about 3% in the three months through September and some are scaling back their forecasts for fourth-quarter growth as lockdowns drag on.

Yet while the restrictions have sent business sentiment and consumer confidence lower in its wake, the stock market is signaling an ongoing belief in the resilience of the economy.

RBA officials, in testimony and updated quarterly forecasts released early last month, were bullish that the economy would bounce back quickly once restrictions were lifted -- as it had in the past. Su-Lin Ong, head of Australian economic and fixed-income strategy at Royal Bank of Canada, is among a growing band of economists that reckon this is unlikely.

“I don’t think we’re going back to the type of world we were in prior to delta,” she said. “We will get some recovery later in the fourth quarter, but it’s only going to be a partial recovery from the contraction at the moment.”