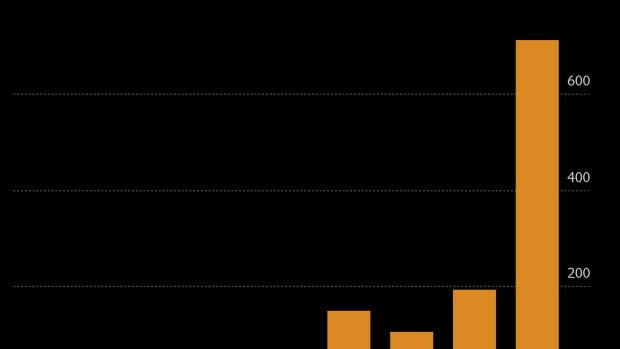 Pedestrians walk up a flight of steps at Martin Place in Sydney, Australia, on Wednesday, June 24, 2020. While the Australian economy lost more than 800,000 jobs in April and May, more timely indicators are painting a better picture. Outside of a small outbreak in the southern state of Victoria, authorities have flattened the Covid-19 infection curve and are reopening the economy earlier than expected. Photographer: Lisa Maree Williams/Bloomberg , Bloomberg

(Bloomberg) -- Australia is finally catching up to the surge of initial public offerings globally, with the country on track to deliver the busiest month for new listings since the start of the year.

Companies have priced about $712 million worth of first-time share sales in Australia so far in October, heading for the highest monthly volume this year, according to data compiled by Bloomberg. That’s more than double the $322 million raised through the end of August, when green shoots of recovery began to appear.

The pickup follows a rebound in Australia’s benchmark S&P/ASX 200 of almost 40% from its March low. It also puts Australia back onto the map of global IPO activity, which started gathering pace in June. US markets have been busy with a boom in Special Purpose Acquisition Company listings and technology offerings, and Asia has seen a wave of listings as mainland China reforms listing rules while U.S.-listed Chinese companies embrace bourses closer to home.

“We do see market conditions as being conducive to IPO issuance over the balance 2020 and into 2021,” said Hamish Whitehead, co-head of equity capital markets for Australia and New Zealand at Citigroup Inc. “We’re reasonably constructive on the outlook for 2021 because should there be a reopening there is a backlog of deals from nine to 18 months ago.”

Australian online retailer MyDeal.com.au shot up in its first day of trading after its A$40 million ($28 million) IPO, opening at A$1 on Oct. 22 and closing at A$1.75.

Australia’s biggest IPO of the year may be yet to come. Brookfield Asset Management Inc. last week started gauging investor demand for an IPO of its coal terminal operator, which could achieve an equity value of as much as A$1.5 billion through the listing, Bloomberg News has reported.

Other offerings in the works include one by Home Consortium Ltd., a real estate company, which said this month it was planning an IPO of its supermarket-focused HomeCo Daily Needs REIT. The listing could raise A$300 million and could begin trading Nov. 23.

Despite the increase, the total raised through IPOs in Australia this year is historically low. Only $1.2 billion of first-time share sales have priced so far in 2020, compared to $4.7 billion in 2019 and $6.3 billion in 2018. Investors remain cautious about the U.S. presidential election and the months-long coronavirus lockdown in Victoria, Australia’s second-most populous state, Whitehead said.

The outlook for the Australian IPO market depends on the prospects for economic recovery, which could drive interest at home as well as from overseas. “We are seeing good support from international investors,” Whitehead said.

Investors have been looking for stocks in sectors that promise growth or steady dividends, Whitehead said. There may be room for offerings from other areas of the economy once a reopening takes root, he added.