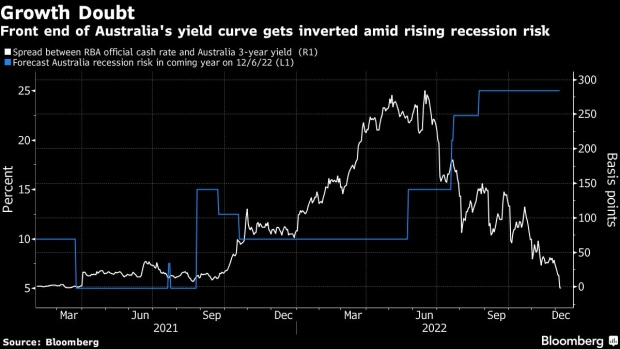 (Bloomberg) -- The front end of Australia’s yield curve was inverted for the first time in 21 months, underscoring investor doubts as to whether the nation’s Reserve Bank can continue to raise its policy rate in the face of rising recession risks.

Yield on the benchmark three-year government note dropped below the cash rate this week for the first time since March 2021 as the RBA lifted the policy rate by 25 basis points to 3.10%. The three-year yield was at 3.07% on Wednesday.

Australia’s economy is sandwiched between weakening growth momentum and elevated inflation, which complicates the central bank’s efforts to contain the latter. Official data showed on Wednesday that gross domestic product expanded 0.6% in the three months through Sept. 31, falling short of the 0.7% growth estimated by economists in a Bloomberg survey. The RBA has lifted the policy rate by 300 basis points this year, half of which occurred in the third quarter.

Bond yields have fallen in part by similar moves globally as well as some apparent loss of growth momentum locally, said Andrew Ticehurst, a rates strategist at Nomura Holdings Inc. in Sydney.