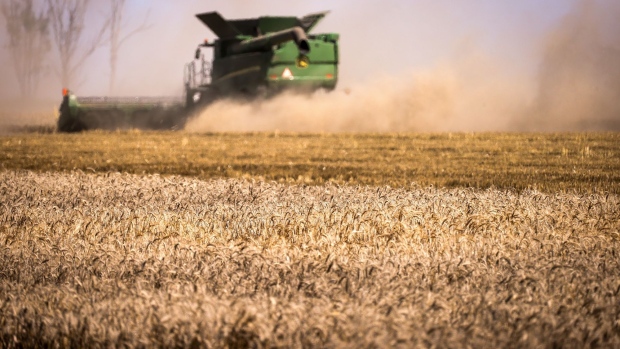 A farmer operates a combine harvester during a wheat harvest at a farm near Gunnedah, New South Wales, Australia, on Tuesday, Nov. 10, 2020. Media reports suggesting China could soon target imports of Australian wheat, after already turning its attention to barley, wine, cotton and beef, have rattled the market. , Bloomberg

(Bloomberg) -- Australia, one of the world’s largest wheat exporters, is poised to harvest another record crop this season even as heavy rains hurt yields in the eastern states, according to the government forecaster.

Farmers are set to gather 36.6 million tons in 2022-23, Abares said, which is a jump of almost 14% from its September forecast, driven by spring rains which helped areas in Western Australia and South Australia. It’s also an increase of 1% from the previous all-time high last season. Canola production is estimated at 7.3 million tons, the highest ever and 4% more than last season.

More wheat from Australia, ample supplies from Russia and the renewal of safe passage for Ukrainian exports through the Black Sea have helped drive benchmark futures in Chicago to the lowest intraday level since October last year. Prices have dropped about 45% from a record high in March, cooling fears over global food inflation and security. Still, world inventories remain tight.

Supply pressure may last for some time even when La Nina conditions subside, as it will take more than one season to replenish inventories, Abares said.

Predictions of bumper production in Australia won’t be experienced evenly, Abares said. Widespread flooding in the eastern states has resulted in a mixed picture for growers there who have been battling crop losses, waterlogged machinery and damaged roads which are hampering the harvest.

Crop abandonment in the eastern states due to flooding and extreme rainfall over spring is estimated to total around 16% of planted area in New South Wales, 7% in Victoria and 5% in Queensland, according to the forecaster.

“Considerable uncertainty remains over winter crop harvest progress and grain quality in New South Wales and Victoria given ongoing high rainfall, which could lead to downgrades in production value,” said Jared Greenville, Abares executive director. Harvests are likely to run well into the summer, he said.