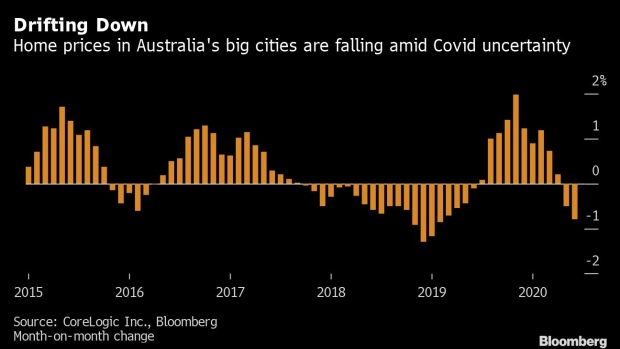 Homes stand in the Bella Vista suburb of Sydney, Australia, on Wednesday, June 3, 2020. Australia’s economy contracted in the first three months of the year, setting up an end to a nearly 29-year run without a recession as an even deeper slowdown looms for the current quarter. , Bloomberg

(Bloomberg) -- Australian house prices fell for a second straight month in June, as the coronavirus shutdowns continue to weigh on the property market.

Home values in major cities fell 0.8% last month, accelerating from a 0.5% decline in May, according to CoreLogic Inc. data released Wednesday. The slide was led by Melbourne and Perth, where prices dropped 1.1%. In Sydney, prices fell 0.8%.

While the decline in property prices from the coronavirus outbreak has been milder than initially anticipated, “the downside risks remain significant,” said Tim Lawless, head of research at CoreLogic.

The real test for the housing market will come later this year when current extraordinary levels of government and bank assistance wind down. More than 485,000 mortgage borrowers are on payment holidays, amounting to about 11% of property loans at the major banks, according to Morgan Stanley analysts. About 3.5 million workers are on government wage subsidies.

Read more: Australia Housing Not the One-Way Road to Riches It Once Was

“Eventually the economy and borrowers will need to abide by market forces,” Lawless said. “This is when we could see a rise in mortgage arrears and the potential for a lift in urgent or forced sales.”

While Australia’s success in containing the virus means the economy is reopening quicker than in many other countries, economists expect the after-effects to linger for years.

Treasurer Josh Frydenberg said last week the jobless rate is likely to climb to about 8% in the third quarter, while signaling he doesn’t intend to take a “cold turkey” approach to ending fiscal support.