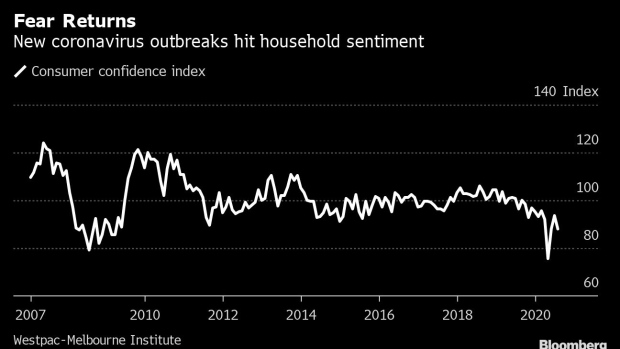 A shopping cart is left abandoned on a deserted street in the Docklands area of Melbourne on July 9. , Bloomberg

(Bloomberg) -- Australia’s consumer confidence slumped in response to Melbourne’s lockdown to contain a second wave of Covid-19 cases in the nation’s second-largest city.

“Sentiment has been rocked by the resurgence in coronavirus cases,” said Bill Evans, chief economist at Westpac. “State readings underscore the importance of virus-related developments: Victoria’s sentiment index plunged 10.4% in July but sentiment across the rest of the nation showed much milder declines.”

Australia has been relaxing restrictions and reopening its economy since May, until the renewed outbreak in Victoria early this month saw shutdowns return. Concerns are rising about the virus spreading, with isolated episodes in the outer suburbs of Sydney prompting some state governments to keep their borders closed.

“The timing of the survey is relevant,” Evans said. “It covered the week in which the lock down was announced for Melbourne but the survey closed before the news of a significant cluster was reported for Sydney.”

The poll was based on responses from 1,200 people and conducted in the week from July 6-10.

The federal government is due to deliver a fiscal and economic statement next week that’s expected to show the outlook for the coming two years and the status of the stimulus programs due to expire in September. Treasurer Josh Frydenberg has signaled an extension of support for furloughed workers and the unemployed is likely.

“While the government is likely to release some revised economic forecasts most attention will be on its policy intentions for the December quarter and beyond,” Evans said. “With this sharp relapse in consumer confidence stemming from the latest news on the closures in Melbourne the policy response is likely to be even greater.”