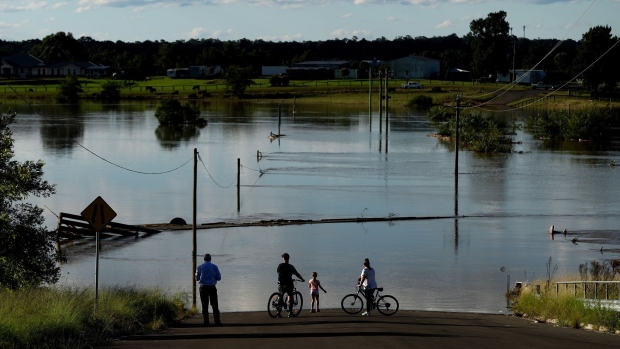 (Bloomberg) -- With COP26 just days away and an election looming, Australian Prime Minister Scott Morrison’s ruling Liberal-National coalition is still sparring over what climate policy he’ll take to the crucial talks in Glasgow.

Junior coalition member the Nationals party, which prides itself on backing rural Australians and has supported the fossil-fuel industry for years, is resisting Morrison’s push to commit to net-zero emissions by 2050. While the prime minister is a longtime coal supporter and his conservative government is popular in mining communities, he’s betting that tougher action to combat climate change is now necessary for his political survival.

Recent catastrophic bushfires and floods in Australia, one of the world’s biggest fossil-fuel exporters and emitters per capita of greenhouse gases, have increased voter support for more decisive action on climate change. One poll in May showed 78% of Australians supported setting a 2050 net-zero emissions target.

Joe Biden’s election victory in the U.S. has added pressure from Australia’s main ally for more ambition on cutting greenhouse gases, even as net-zero commitments by the biggest buyers of the country’s fossil fuels — China, Japan and South Korea — point to a long-term structural decline in demand.

That’s led Morrison to try to strong-arm his coalition partners to reach a deal before COP26, which starts Oct. 31. While technically he could announce a net-zero target without their unanimous agreement, such a move risks critically undermining his political authority and causing a rift that could spill over into an election that must be held by May.

The Liberal-Nationals coalition stretches back almost a century, with both parties cooperating in election campaigns and avoiding running against each other. Every member of parliament is crucial to the government’s stability: The 76 lawmakers in the bloc — 60 from Morrison’s Liberal party, and 16 from the Nationals — hold a razor-thin majority in the 151-seat lower house.

With his coalition trailing in the polls, Morrison has an incentive to put the net-zero battle behind him so he can focus voters on the nation’s post-lockdown recovery. But some Nationals are worried that strategy might backfire.

Many traditional coalition supporters who back the coal industry may vote for alternatives in the next election if they see “we have signed up to a woke-Left agenda of net-zero emissions by 2050, apparently because Biden got elected in the U.S.,” Nationals Senator Matt Canavan said this week.

Others in the party are indicating they could support net-zero — at a price. When asked in a television interview on Tuesday whether his party would strike a deal if the regions were promised an adequate amount of funding, Nationals Deputy Leader and Agriculture Minister David Littleproud replied: “Money makes the world go around, mate.”

His party-room colleague, Resources Minister Keith Pitt, said in an interview this month that the Nationals should only back net-zero in return for the creation of a government-run A$250 billion ($187 billion) “lender of last resort” to keep existing coal projects operating and create new ones.

Such demands show the longstanding divisions over climate change aren’t going away soon. Malcolm Turnbull, Morrison’s predecessor who was removed as prime minister by his own party in 2018 after attempting to reform energy policy to encourage more investment in renewables, said the coalition’s right-wing — including the Nationals — has been the biggest obstacle to climate action.

In an interview on Tuesday, Turnbull blamed the failure to pass tougher measures on “the inability to get anything done within the coalition party room and all of the loony-tune politics there.”

Morrison has given few details about how he intends to get to net-zero, but has said he supports “technology” to reach the target rather than “taxes” on polluters.

Still, his shift on climate risks hurting his party in crucial swing districts where coal-mining is still a major employer. What’s more, many political opponents and climate activists say a net-zero commitment by 2050 is too little, too late, and Morrison should instead focus on providing more emission cuts in the short term.

“It will be a difficult position for the head of a developed nation to be in Glasgow without a strong 2030 emissions-cut target,” said Frank Jotzo, an academic in climate economics and policy at the Australian National University.

“While a 2050 commitment will be viewed as a positive, there will naturally be questions asked about how soon Australia will be getting on that trajectory as soon as possible,” he added. “There will always be skepticism on pledges that are not underpinned by action.”