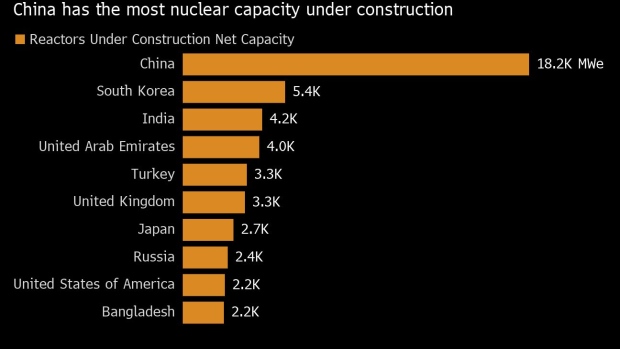 (Bloomberg) -- The planned restart of a mothballed uranium mine in Australia -- the world’s third-largest producer -- is a fresh sign that developers are beginning to respond to an improving demand outlook and the support of the Biden administration for zero-emissions nuclear energy.

The Honeymoon mine, which was shuttered in 2014 due to weak prices, could be re-started in 12 months, developer Boss Energy Ltd. said in a feasibility study. The company was just waiting for a stronger price signal, according to Chief Executive Officer Duncan Craib, adding that he was confident market dynamics were moving in the right direction.

“There is significant uncovered demand in the coming decades -- and post-2023, primary supply to meet that demand is severely limited,” Craib said in a phone interview. He was seeing most interest from potential buyers in the U.S., which accounted for over 20% of global uranium demand, while he was also in discussions with utilities in Europe and Asia.

Uranium prices have languished since the 2011 Fukushima disaster in Japan saw nuclear power fall out of favor with energy planners. Now nuclear is cautiously making a comeback -- with the White House arguing it should be one of the power sources eligible for a national clean energy mandate as part of President Joe Biden’s ambitious climate goals.

Boss’s study used a uranium base case price of $60 a pound over an 11-year mine life, well above current contract prices in the high $30s, based on its expectations for tightening supply, declining stockpiles and the global emissions-driven push for carbon-free fuels. Their view is backed by the Australian government, which sees uranium spot prices rising steadily to an average $52.40 a pound in 2026, according to a March report.

“We’re already seeing more interest from utilities in spot and long-term contracting,” said Craib. “We see activity picking up in the third quarter and continuing into the next calendar year.” The recent tie-up between Sprott Asset Management LP and Uranium Participation Corp. to set up a trust to buy physical uranium would further stoke demand, he added.

China is another growth area, potentially doubling its nuclear generation capacity to as much as 100 gigawatts by 2030, according to Bloomberg Intelligence analyst Simon Chan. A recent safety scare around a gas build-up in the Taishan nuclear plant in Guangdong is unlikely to derail that growth, according to experts.

“Safety is always a focus for nuclear due to its potential impact,” Chan said. “We think the recent issues at Taishan could increase the attention on safety, but the long-term growth outlook should remain intact.”

Australia has two active mines -- BHP Group’s Olympic Dam and Quasar Resources Pty’s Four Mile. Honeymoon, which was acquired by Boss in 2015, could add an extra 2.45 million pounds (1,225 tons) of production a year to a market, which currently requires around 67,500 tons a year, according to the World Nuclear Association.

Boss Energy, which counts Paradice Investment Management LLC and Tribeca Investment Partners Pty, among its investors, has seen its shares jump 63% this year. Other major producers Cameco Corp. and Paladin Energy Ltd. have risen 48% and 92% respectively.