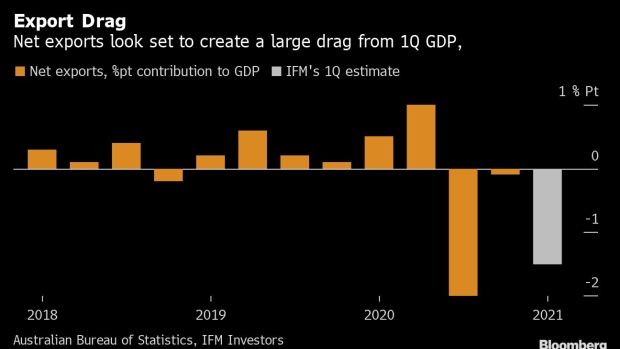 (Bloomberg) -- Supply Lines is a daily newsletter that tracks trade and supply chains disrupted by the pandemic. Sign up here.

Australia’s weak export volumes in the first three months of this year are likely to detract from gross domestic product in the period, according to Capital Economics.

Across the first quarter, the value of exports increased by 5.4% from the prior three months, and the value of imports gained 3.4%, Capital said. Yet, it’s a very different picture when prices are stripped out, as a 10.6% surge in export prices implied an almost 5% drop in export volumes -- which is what feeds into the GDP calculation.

Alex Joiner, chief economist at IFM Investors in Melbourne, said a back of the envelope calculation suggests a 1.5 percentage point subtraction from quarterly real GDP growth.

“This means that despite continued gains in consumption and investment, we’ve penciled in only a tiny increase in GDP,” Marcel Thieliant, senior Australia and New Zealand Economist at Capital Economics, said in a research note Tuesday. “But with the rally in the Australian dollar having run out of steam, growth in imports may slow while manufacturing exports should no longer lose competitiveness.”

Australia’s economy has experienced a V-shaped recovery and its trade picture has been underpinned by a surge in the iron ore price, which is close to a record high as producers struggle to keep up with demand from Chinese steelmills. Australia’s weakest quarters are often in the first three months of the year and these trade data suggest 2021 will be similar.