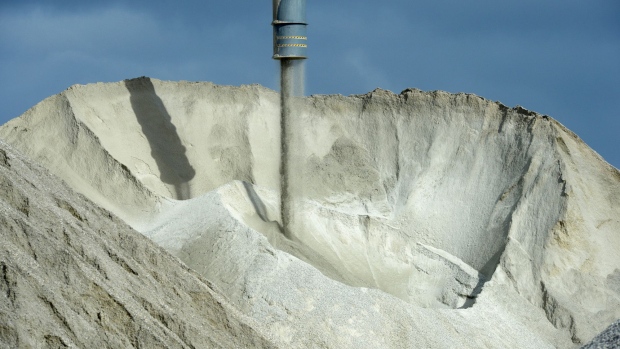 Lithium ore falls from a chute onto a stockpile at a Talison Lithium Ltd. facility, a joint venture between Tianqi Lithium Corp. and Albemarle Corp., in Greenbushes, Australia, on Thursday, Aug. 3, 2017. Rising Chinese demand for lithium-ion batteries needed for electric vehicles and energy storage is driving significant price gains and an asset boom in Australia, already the world's largest lithium producer. , Bloomberg

(Bloomberg) -- Australia is gearing up to win a bigger market share for critical materials that can be used in everything from electric cars to aerospace.

The mining powerhouse will establish a A$2 billion ($1.5 billion) loan facility for critical minerals projects, Prime Minister Scott Morrison said in a statement. The fund would help fill finance gaps in developments, helping to drive the new-energy economy, he said.

Australia has already dominated the mining of battery metals and is the biggest exporter of lithium, a key material in the electric-vehicle revolution. The government has also been keen to encourage more exploration activity, while Tesla Inc. -- which has battery projects in the country -- has previously urged the nation to prioritize onshore refining of minerals too.

“The commercial dimensions of the critical minerals market mean it is a difficult place to get established,” Morrison said in the statement. “We want to ensure that Australia’s resources producers do get established so they can link up with others in our supply chains in a free and open Indo-Pacific.”