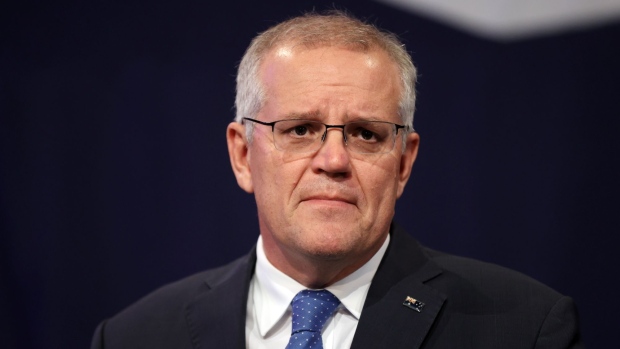 Scott Morrison, Australia's prime minister, during the Liberal National coalition election night event in Sydney, Australia, on Saturday, May 21, 2022. Australia’s Labor Party is set to take power for the first time since 2013, as voters booted out Morrison’s conservative government in a shift likely to bring greater action on climate change and a national body to fight corruption. , Bloomberg

(Bloomberg) -- Australian Prime Minister Anthony Albanese has ordered a review into claims his predecessor secretly took charge of multiple ministries during the pandemic, describing it as a “shadow government.”

Former leader Scott Morrison allegedly swore himself in as health minister, finance minister and resources minister between 2020 and 2021, sometimes without the knowledge of the incumbent, according to a new book to be released on Tuesday.

Albanese has asked the secretary of the Department of Prime Minister and Cabinet to seek advice on the legality of Morrison’s secret decisions, he said at a press conference in Melbourne on Monday. The prime minister said he would make a decision on how to proceed once he had received that advice.

“This is the sort of tin pot activity that we would ridicule if it was in a non-democratic country,” said Albanese. “This is the government of Australia, where the people of Australia were kept in the dark as to what the ministerial arrangements were -- it’s completely unacceptable.”

Morrison’s government was frequently criticized for its actions during the pandemic, including allegations that his administration moved too slowly to secure vaccine supplies. Morrison was defeated by Albanese’s center-left Labor Party in an election in May.

The former prime minister didn’t immediately reply to a request for comment.

According to an excerpt of the book published in The Australian, Morrison told then-Health Minister Greg Hunt that he would be swearing himself in as joint health minister after the pandemic began to worsen in March 2020.

“I trust you, mate,” Morrison told Hunt, according to the book, “but I’m swearing myself in as health minister, too.”

Morrison wanted ensure there would always be a health minister even if Hunt was struck down with the virus, the book said, but also to avoid too much centralization of power in one minister. The book was written by Simon Benson, the political editor of The Australian newspaper, and its chief political reporter Geoff Chambers.

The former Finance Minister Mathias Cormann said he wasn’t aware while in government that Morrison had also sworn himself into the finance portfolio, according to Sky News Australia. Morrison also swore himself in as a joint minister for resources, according to News.com.au, and used his powers to overrule the primary minister Keith Pitt on a proposed offshore gas project.