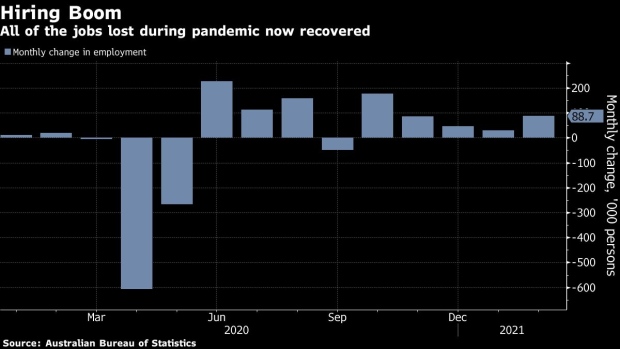 Treasury estimates up to 150,000 jobs could be lost with the end of the program and acknowledges some firms will collapse without government support. This could hit pause on a hiring boom that’s seen unemployment fall to 5.8% in February from a pandemic peak of 7.5% and early fears of 10% joblessness.

If all other labor market variables remained unchanged, Treasury’s upper estimate of job losses would send unemployment to 7%, according to calculations by Bloomberg News.

The government’s signature Covid-19 support program sought to keep workers attached to firms during lockdowns and other restrictions at an estimated cost of A$90 billion ($68 billion) -- or around 5% of gross domestic product. The strategy, introduced at the beginning of the pandemic, was still subsidizing around 1.1 million workers at its conclusion, according to Treasury estimates.

While acknowledging the risks to these people, Treasury Secretary Steven Kennedy last week defended the decision to conclude JobKeeper. “The program has a number of features that create adverse incentives, which are likely to become more pronounced as the economy recovers,” he said.

Those sentiments were echoed by Reserve Bank of Australia Deputy Governor Guy Debelle, who said unemployment had fallen a lot faster than the central bank had anticipated. At the same time, he said “I don’t think we’re through the bumps and the unevenness yet. So it may not be a straight line from here.”

The RBA, in its February forecasts, predicted the jobless rate would be 6% by December this year and 5.5% at the end of next year. Under an optimistic scenario, it would fall to 4.75% by the end of 2022. Debelle said the bank hasn’t yet updated its outlook given the better-than-expected outcomes and will do so in its May update.

Since June 2020, Australia’s economy has generated more than 875,000 jobs and only shed positions in one month -- September -- that coincided with the southern state of Victoria’s second wave of Covid. The strength of the recovery suggests the labor market should absorb roles lost from the program expiring.

Job advertisements surged 7.2% in February and the RBA’s liaison with businesses indicated that some firms were having trouble finding suitable workers in select regions and industries.

Hiring should also be aided by New South Wales, the most populous state, scrapping a host of restrictions from Monday on the hospitality industry -- one of the hardest hit by the pandemic -- which should benefit businesses hamstrung by previous limits.

“The end of JobKeeper might mean a short spell in rehab for the economy, but its expiry will not be a medical emergency,” said Besa Deda, chief economist at St. George Bank. “The momentum in the jobs market will help the economy absorb its expiry. The unemployment rate should still end this year lower.”

Yet the sheer scale of the program suggests there will be disruptions ahead. John Edwards, a former member of the RBA’s board and economic adviser to ex-Prime Minister Paul Keating, said JobKeeper’s removal represents “a fiscal contraction bigger than we’ve probably ever experienced.”

Australia’s border remains closed and isn’t likely to reopen until later in the year, at the earliest, leaving international education and tourism in flux. The government is assisting regions dependent on tourism and the airline industry via a A$1.2 billion package, yet further job losses are expected.

For Prime Minister Scott Morrison’s center-right government, the stimulus withdrawal poses a political risk. A rise in unemployment would erode the political capital accrued from the economy’s relative resilience at a time when popularity is already dented over the handling of scandals within parliament.

Last month’s jump in underemployment -- or people employed who would like to work more hours -- suggests there’s plenty of slack in the labor market.

“There is still more work to be done to lift hours back to pre-pandemic levels,” said Diana Mousina, senior economist at AMP Capital Investors Ltd. “There is still a larger than usual share of people who are working fewer hours because there is no work, there isn’t enough work or they have been stood down.”

She notes 167,500 people -- or 1.3% of those employed -- fit into this category and represent “the group that is most at risk of job loss after JobKeeper expires.”