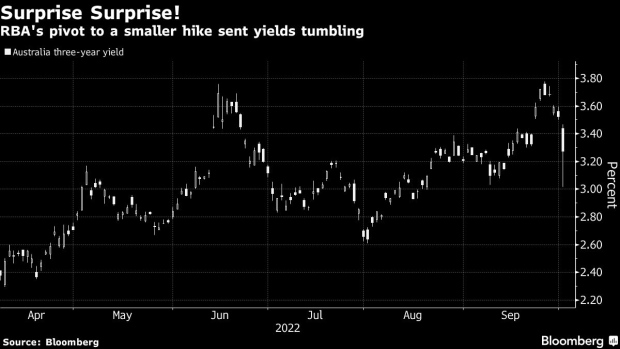 Signage for the Reserve Bank of Australia (RBA) at the central bank's building in Sydney, Australia, on Monday, Sept. 6, 2021. Australia's central bankers are set to revisit the question of whether to delay a planned taper of bond purchases as a worsening outbreak of the delta variant dims prospects of a rapid economic rebound. Photographer: David Gray/Bloomberg , Bloomberg

Con Michalakis, deputy CIO of the A$81 billion ($53 billion) fund, was commenting after the Reserve Bank hiked by a less-than-expected 25 basis points on Tuesday. He said it was still too early to judge whether Australia was facing a recession, as Governor Philip Lowe seeks to tame inflation while ensuring that the country’s highly-indebted households can manage soaring borrowing costs.

“In terms of central bank behavior, with the steep rate rises around the world that we’ve seen, we’re getting closer to the peak than we are from the beginning,” Adelaide-based Michalakis said in an interview. “We’re getting into a situation where you’re starting to see the rate rises baked in, but the slope may be changing.”

The Reserve Bank’s move is being interpreted by some as a sign that the end is in sight to the wave of aggressive tightening that has steamrolled global bonds and equities this year. Yields on three-year Australian government bonds plunged by the most since 2008 on Tuesday after the central bank’s decision.

Michalakis said that Australia’s jobs market was still holding up well. The labor market is “very tight” and the jobless rate around the lowest in 50 years, Lowe said on Tuesday.

Michalakis also signaled that Host-Plus could join the growing cohort of investors looking to scoop up debt investments, saying the current global market volatility was generating opportunities for the fund.

“We expect to find more areas to invest in, for example credit. Our managers can access a broad range from private credit right through to high yield loans, investment grade, even government bonds,” said Michalakis, who was CIO of pension fund Statewide Super when it merged with Host-Plus earlier this year.

“As the market has sort of dislocated, we’ve seen the opportunities are valuable there and our managers are deployed right across the whole fixed income area.”