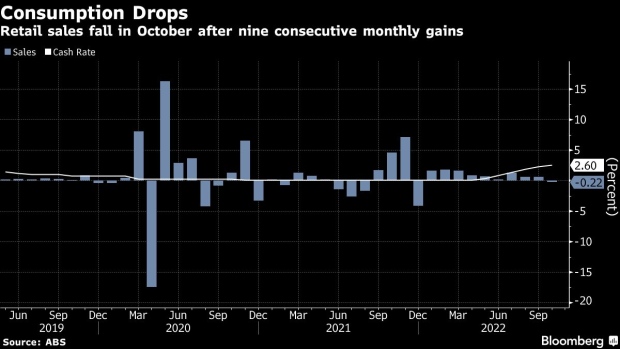 (Bloomberg) -- Australian retail sales declined for the first time this year in October, suggesting that households are finally beginning to feel the strain of faster inflation and rising interest rates.

Sales dropped 0.2% from September, confounding economists’ estimates for a 0.5% gain, Australian Bureau of Statistics data showed Monday. No one predicted a decline, with Commonwealth Bank of Australia coming closest, forecasting no change.

“The October fall in retail turnover ends a run of nine straight monthly rises and suggests increased cost of living pressures including interest rate rises have started to weigh on consumer spending,” Ben Dorber, head of retail statistics at the ABS, said in a statement. “Turnover fell in all industries in October except for food retailing.”

A combination of tighter monetary policy and increasing prices has already battered consumer sentiment while the re-emergence of overseas travel is threatening to shift spending offshore. Bloomberg Economics expects further weakness through the rest of this year and into 2023 as the full impact of rate hikes passes through to household budgets.

Resilient consumer spending was one reason the Reserve Bank was confident in its decision to keep lifting borrowing costs, with a quarter-point hike expected next week that would take the cash rate to 3.1%. Money markets imply a peak rate of 3.8% next year while economists expect the central bank will pause at 3.6%.

Today’s figures will be closely watched by policy makers who have repeatedly said a key risk to the outlook is the response of households to rapidly rising borrowing costs.

Household spending accounts for roughly 60% of gross domestic product. The RBA is prepared for a slowdown, with its own forecasts showing consumption growth slowing to 1.3% by end-2023 from a forecast 6.6% in December.

--With assistance from Tomoko Sato and Yoshihiro Sato.