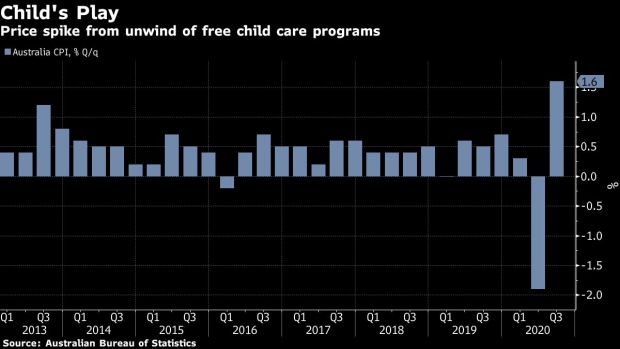 (Bloomberg) -- Australia’s consumers prices rose slightly faster than forecast in the three months through September, reflecting a rebound in childcare and fuel prices, but still well-short of the central bank’s goal.

The trimmed-mean gauge, a key core measure, gained 0.4% from the second quarter for an annual increase of 1.2%, compared with forecast gains of 0.3% and 1.1%, respectively. The Reserve Bank of Australia targets inflation of 2%-3% and has struggled to achieve the lower level of that band for most of the past half-decade.

The Australian dollar was little changed after the release, and traded at 71.23 U.S. cents at 11:54 a.m. in Sydney. It climbed almost 4% in the third quarter, extending a rebound from its March nadir of around 55 cents at the peak of Covid uncertainty.

“Child care fees returned to their pre-Covid-19 rate having been free during the June quarter,” said Andrew Tomadini, head of Prices Statistics at the ABS. “This was the largest contributor to the CPI rise in the September quarter. Excluding the impact of child care, the CPI would have risen 0.7%.”

Australia’s economy was divided during the June-to-September period as the states relaxed restrictions at varied speeds. Victoria meanwhile returned to harsh lockdown as a renewed outbreak spread throughout the state. The RBA is expected to inject further monetary stimulus into the economy next week as Victoria finally reopens.

The central bank has adjusted its inflation framework to allow the economy to run a little hotter. Governor Philip Lowe, in a speech earlier this month, said the central bank wouldn’t tighten policy until actual inflation was sustainably inside its target, rather than just forecast to return there as was previously the case.

Today’s inflation report showed tradables prices, which are typically impacted by the currency and global factors, rose 1.4% in the third quarter from the previous three months. Non-tradables, which are largely affected by domestic variables like utilities and rents, advanced 1.6%.

The weighted median gauge, another core inflation measure, rose 0.3% in the quarter for an annual increase of 1.3%, matching estimates.

Australia recorded deflation in the second quarter as a combination of free childcare during the pandemic and an oil price drop sent the index into negative territory for only the third time in series history.

The RBA in March cut the cash rate to 0.25% and set the same target for the three-year bond yield, a combination designed to reassure households that rates would remain low for an extended period. It also established a lending program for banks to lower borrowing costs, a program that was subsequently expanded in September.

The central bank, at Tuesday’s meeting, is expected to cut the cash rate and yield target to 0.10% and potentially announce an expanded bond-buying program.

(Updates with further details from the report from eighth paragraph.)