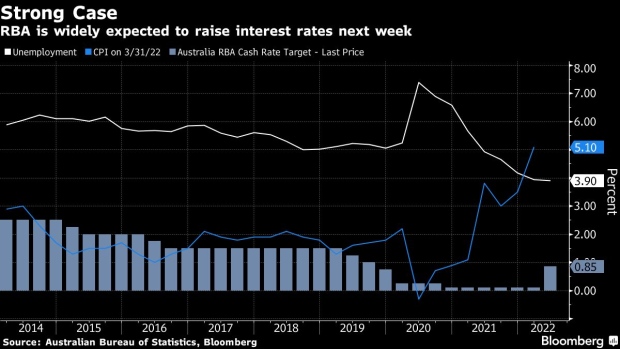 Newly built houses in the Denham Court suburb of Sydney, Australia, on Tuesday, May 3, 2022. One of the developed world’s last remaining doves turned hawkish as Australia’s central bank rocked markets with a bigger-than-expected interest-rate hike in the middle of an election campaign. , Bloomberg

Sydney prices slid 1.6% in the city’s fifth straight monthly fall, while Melbourne dropped 1.1%, CoreLogic Inc. said in a report Thursday. They were the main drivers behind a 0.8% month-on-month decline in the country’s combined capital cities index.

“Since the initial cash rate hike on May 5, most housing markets around the country have seen a sharper reduction in the rate of growth,” said CoreLogic Research Director Tim Lawless.

The Reserve Bank of Australia began its tightening cycle earlier than expected in May and has since raised rates by a total 75 basis points, in back-to-back moves, to 0.85%. It’s widely expected to hike again next week with money market bets implying the cash rate at 3.2% by December.

“Considering inflation is likely to remain stubbornly high for some time, and interest rates are expected to rise substantially in response, it’s likely the rate of decline in housing values will continue to gather steam and become more widespread,” Lawless said.

Today’s report showed annual growth in capital city home values slowed to 8.7% over the 12 months to the end of June, from a recent peak of 21.3% for the year through January.

Values in Sydney are still up 5.9% from a year ago. In the relatively cheaper Melbourne market, they have risen 3.1%.

The house price-to-income ratio in Australia, of nearly 120, is among the highest in the developed world -- making it one of the most expensive markets globally.

Lawless said that there weren’t any signs of “panicked selling” yet while adding it was “highly uncertain” how far housing values would fall through the downturn.