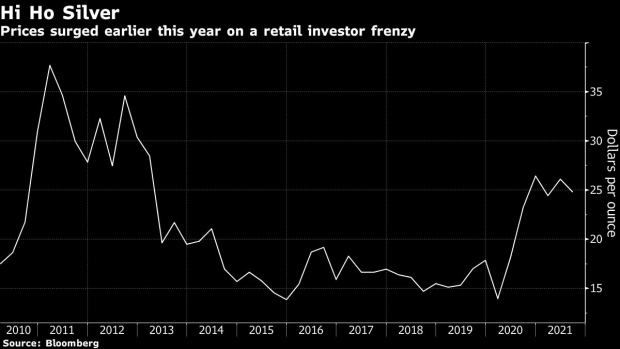 A worker inspects silver granules at the ABC Refinery smelter in Sydney, New South Wales, Australia, on Thursday, July 2, 2020. Western investors piling into gold in the pandemic are more than making up for a collapse in demand for physical metal from traditional retail buyers in China and India, helping push prices to an eight-year high. Photographer: David Gray/Bloomberg , Bloomberg

An Australian prospector is aiming to tap into what it says is a robust long-term demand outlook for silver, a key ingredient in solar panels.

Silver Mines Ltd.’s Bowdens project in New South Wales -- set to start operations in 2023 -- will have an initial output target of 6 million ounces a year, said Managing Director Anthony McClure. That will make it the country’s biggest new mine for the metal in more than two decades, and Australia’s No. 2 silver producer behind South32 Ltd.‘s Cannington mine in Queensland.

“The resource is vast, and growing -- it’s the largest undeveloped silver project in Australia and one of the largest in the world,” McClure said in an interview. Silver’s role in the energy transition will aid the long-term fundamentals, and the project will also chip away at Latin America’s market domination, he said.

Mexico is the world’s biggest miner of silver, which is also used in electronics, jewelry and bars and coins, followed by Peru. McClure said the Bowdens project trades at a discount to its U.S.-listed peers because of its location, and it’s seeking greater North American ownership. Shareholders include global resources investors such as Sprott Inc. and Van Eck Associates Corp.

Silver prices tested an eight-year high in February amid a retail investor frenzy stoked by Reddit’s WallStreetBets forum. They’ve cooled since then, however, tracking a pullback in gold as investors switched to assets more exposed to the global economic recovery. Still, the precious metal remains elevated compared to its levels for most of the past decade.

“Silver has come off over the past couple of months,” McClure said. “We’re not concerned about that. Our mantra has been to de-risk the project and hopefully that will coincide with a stronger market.”

While silver is a by-product at many Australian mines, resources identified to date have lacked the scale to make standalone developments viable. The country is the world’s No. 5 silver miner, producing around 44 million ounces a year, according to The Silver Institute. That compares with 178 million ounces from Mexico and 110 million from Peru. Global demand was just under 900 million ounces last year, around half of which was from industrial buyers.

Silver Mines bought Bowdens for A$25 million ($18.6 million) from Kingsgate Consolidated Ltd. in 2016. The mine will start as an open-cut operation, before exploiting rich underground seams a few years down the track, McClure said. There are 163 million ounces of silver in identified resources, and there’s potential for that to increase as much as threefold depending on drilling results, he said.