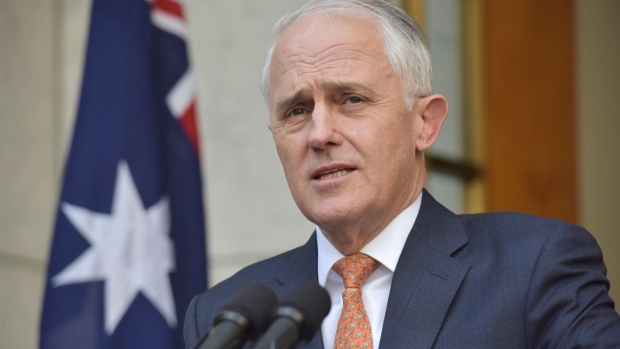 The ex-Liberal Party leader, who will fly this week to Glasgow, Scotland, to attend the COP26 summit, said his successor Scott Morrison has missed an opportunity to set out more aggressive curbs and to make Australia a global leader in clean energy.

Morrison confirmed Tuesday that Australia will aim to zero out its emissions by 2050, becoming one of the last major economies to set a goal to do so, though ruled out changes to targets set for the end of this decade. The announcement followed prolonged debate within his governing coalition.

“Everyone has been encouraging Australia to have greater ambition for its 2030 target -- and we’ve squibbed that, we haven’t increased it at all,” Turnbull said in a Bloomberg Television interview. “If a wealthy country like Australia is not going to take serious action to cut emissions, then other countries will say, well, why should we bother to?”

Optimism is waning over the prospects for major new agreements at the summit, and an assessment released this week of national climate pledges shows the planet remains at risk of catastrophic levels of global warming. An energy crisis in Asia and Europe has harmed chances of a deal to end the use of coal, while many nations continue to hold out on a pact to lower methane emissions.

“You can’t get to net zero, we can’t and the world can’t, unless we stop digging up and burning coal and gas,” according to Turnbull, who was ousted by his party in 2018 when lawmakers opposed a planned energy policy. “The politicians in power at the moment don’t want to say that, but the reality is we’re going to have to do that.”

Morrison’s 2050 pledge may not be enough to secure a warm welcome in Glasgow. After his announcement on Tuesday, COP26 President Alok Sharma said in a tweet that he hoped “Australia will build on this by submitting a more ambitious 2030” target at the summit.

Morrison on Wednesday defended his government’s proposal in an interview with the Australian Broadcasting Corp. and addressed criticism that it relied too heavily on unproven or unavailable technological advances.

“If anybody thinks you’re going to get to net-zero by 2050 by some other method than technological change which is at scale and at cost, then they’re kidding themselves and they’re not going to address climate change,” Morrison said. “They’re just going to make themselves feel good saying all sorts of things but not achieving anything.”

Turnbull’s own attempts to take stronger climate action were hobbled by “ferocious political opposition,” in his own ranks and the media, he said in the Tuesday interview.

As Morrison’s government seeks to defend annual exports of coal, oil and natural gas forecast to be worth about A$124 billion ($93 billion) this fiscal year, Australia may be losing opportunities to become a superpower in supplying clean energy.

“We can be an exporter of clean energy, just as we are today an exporter of fossil fuels,” said Turnbull. “But if we keep on pretending this change isn’t coming, we’ll miss the boat.”