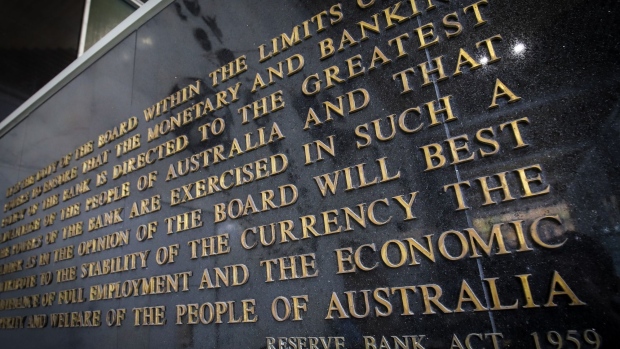 The Reserve Bank Act 1959 is displayed in the foyer of the Reserve Bank of Australia (RBA) building in Sydney, Australia, on Monday, May 18, 2020. Australia’s central bank decided against buying government bonds last week, the first time that’s happened since it began a quantative easing program in late March that sought to hold down three-year yields in order to lower interest rates across the economy. , Bloomberg

(Bloomberg) -- Australia’s central bank chief Philip Lowe said he’s working through how much potential traction any further easing will gain, the potential effect on financial stability of such a move, and what international counterparts are doing before making any new policy moves.

“We have been considering what more we can do to support jobs, incomes and businesses in Australia to help build that important road to the recovery,” Lowe said in the text of a speech to a Citigroup Inc. conference in Sydney Thursday. “The board has not yet made any decisions.”

The Reserve Bank of Australia has taken on a support role during the pandemic crisis due to limited conventional ammunition, instead undertaking a bond-buying program to lower borrowing costs and allow the government to deploy a vast fiscal stimulus program. The RBA in March, at the height of Covid uncertainty, cut its cash rate to 0.25% and set the same target for the three-year yield as a sign to firms and households that rates will stay low.

Australia’s early lifting of lockdown restrictions and reopening of the economy was dented by a renewed outbreak in the southeastern state of Victoria. The economy has since tipped into recession and Treasury estimates unemployment will peak at 8% this quarter.

“In terms of unemployment, we want to see more than just ‘progress towards full employment’,” Lowe said. “We want to see a return to labor market conditions that are consistent with inflation being sustainably within the 2 to 3% target range”

In a speech last month, RBA No. 2 Guy Debelle laid out the following potential policy options:

On the potential for a tightening, the governor was adamant it wouldn’t be happening soon.

“The board will not be increasing the cash rate until actual inflation is sustainably within the target range,” he said. “It is not enough for inflation to be forecast to be in the target range. While inflation can move up and down for a range of temporary reasons, achieving inflation consistent with the target is likely to require a return to a tight labor market.”

“On our current outlook for the economy – which we will update in early November – this is still some years away,” he said. So we do not expect to be increasing the cash rate for at least three years.”