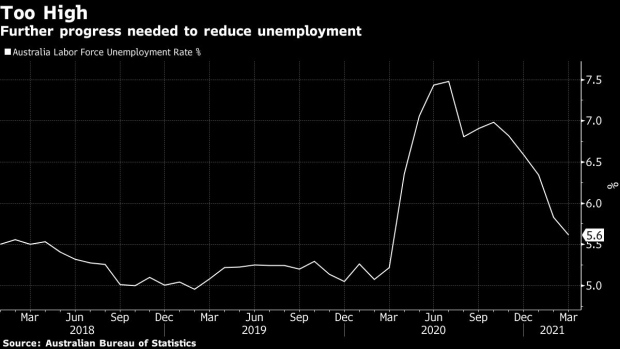 (Bloomberg) -- Discover what’s driving the global economy and what it means for policy makers, businesses, investors and you with The New Economy Daily. Sign up here

As expected, the Reserve Bank of Australia’s kept the cash rate and three-year yield target at 0.10% in Sydney on Tuesday. The bank is also undertaking its second A$100 billion ($77.5 billion) tranche of quantitative easing that’s designed to prevent the currency rising too high.

“The Board is committed to maintaining highly supportive monetary conditions to support a return to full employment in Australia and inflation consistent with the target,” Lowe said in a statement. He reiterated the RBA won’t raise interest rates until actual inflation is sustainably within its target range, which “is unlikely to be until 2024 at the earliest.”

The RBA’s decision to stand still comes a week before the government delivers its annual budget that’s expected to include targeted spending to help boost jobs and spur a faster recovery. Treasurer Josh Frydenberg has lined up behind Lowe’s goal of pushing the economy to full employment as quickly as possible to rekindle inflation.

Australia’s jobless rate has already declined almost 2 percentage points from its pandemic-peak in July last year. The RBA estimates it probably needs to fall closer to 4% before wage growth accelerates.

The central bank releases its quarterly update of economic forecasts on Friday, and Deputy Governor Guy Debelle is due to speak in the mining-centered state capital Perth the night before that.

While Australia has experienced a sharp V-shaped recovery, the RBA shows no sign of following the Bank of Canada in early withdrawal of stimulus. Instead, like the Federal Reserve and European Central Bank, it will keep pumping monetary support until the economy is fully repaired. It would also like to trail any move by the U.S. to avoid unnecessary exchange rate appreciation.

The one area likely causing a headache for Lowe is the property market. Housing has surged in response to record low borrowing costs, government assistance and a lack of supply. Property prices rose 7.8% in the past year, and while similar increases have occurred across the globe, a return to boom times Down Under threatens to swell an already worrisome pile of household debt.

The government’s budget Tuesday is likely to show an improved bottom line due to better employment outcomes that boost the tax take and cut welfare costs. It’s similarly benefited from the high price of iron ore, the nation’s largest export. The steelmaking ingredient is currently trading at around $190 and Citigroup Inc. is forecasting an extended shortfall in the commodity and expects new highs of $200 to be hit over the next few weeks.