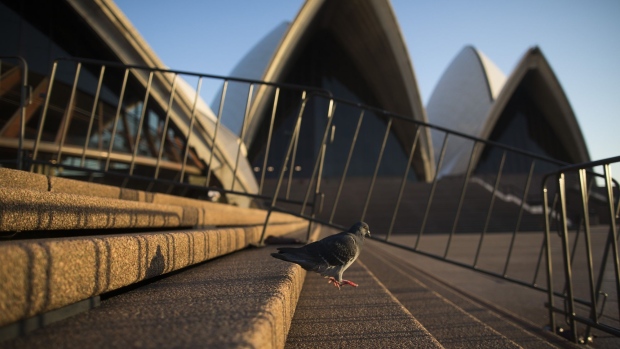 (Bloomberg) -- Australia’s central bank welcomes the respite from bond traders and its policy resolve, rewarded with both lower yields and a weaker currency. Now it confronts a fiscal pullback that could complicate its jobs goal.

The Reserve Bank of Australia is set to complete its first A$100 billion ($76 billion) of quantitative easing soon after Tuesday’s policy meeting and will immediately follow up with another program of the same amount. Governor Philip Lowe is expected to keep the interest rate and yield target at 0.10%.

The Aussie dollar has fallen nearly 5% since it touched 80 U.S. cents in late February. The fortunately timed depreciation helps cushion the expiry of the government’s JobKeeper wage subsidy that was worth about 5% of gross domestic product. The RBA is encouraged by the rapid decline in unemployment as the economy reopened; however, the removal of the subsidy is likely to slow the decline in the coming months.

“There is still significant uncertainty around the outlook,” said Chris Read, a strategist at Morgan Stanley. “We continue to see downside risks for the currency and expect curve steepening in Australia.”

The RBA aims to drive the jobless rate down to the low 4s to spur the sort of sustained wages growth that will return inflation to target. The bank has adjusted its regime to requires actual -- not forecast -- inflation to be within the 2-3% range before it considers moving rates. It doesn’t see that happening until at least 2024.

Money markets and some economists are more optimistic, a quarter-percentage point increase in the cash rate is priced in for 2023 and two more in 2024. Their view is supported by a rapidly recovering U.S. economy turbocharged by a $1.9 trillion stimulus, as well as the vaccine being rolled out across the world.

“We expect interest rate hikes to start in 2023, sooner than RBA expectations because of a strong rebound in the domestic and global economy,” said Diana Mousina, senior economist at AMP Capital Investors Ltd. “The U.S. will also start to raise rates in 2023, but with more aggressive hikes than the RBA.”

Australia surged out of its first recession in almost 30 years, with the economy growing more than 3% in the third and fourth quarters of 2020; unemployment has fallen steadily and dropped by half a percentage point in February to 5.8%.

Since the RBA’s March meeting, the sharp rise in bond yields has abated. The 10-year -- at around 1.8% -- is well shy of its year-to-date high of 1.93% in late February. That’s in line with a general cooling in the global selloff, as policy makers from Washington to Frankfurt to Tokyo reinforced their determination to keep stimulus expansionary as economic growth is restored.

Importantly for the RBA’s yield curve control policy, the three-year government bond is back in line with its target. The front end of the curve rallied after Lowe last month pushed back on aggressive market expectations for even earlier rate hikes than those currently priced in.

Markets are still waiting for the RBA to decide whether it will keep the April 2024 bond as the YCC target, or roll over to the November 2024 maturity. Lowe said last month the board would make a decision later in the year.

Lowe and his colleagues have made clear they won’t be using policy to try to cool rising house prices Down Under. They’ve signaled macroprudential tools would be the first choice if regulators decide lending is becoming excessive.

The rapid economic recovery has led some economists to expect a significantly smaller budget deficit. Commonwealth Bank of Australia sees it at A$145 billion this fiscal year, compared with Treasury’s December forecast of A$198 billion. Deutsche Bank AG has a baseline of A$150 billion, but says there’s a case to suggest it could be as small as A$100 billion.