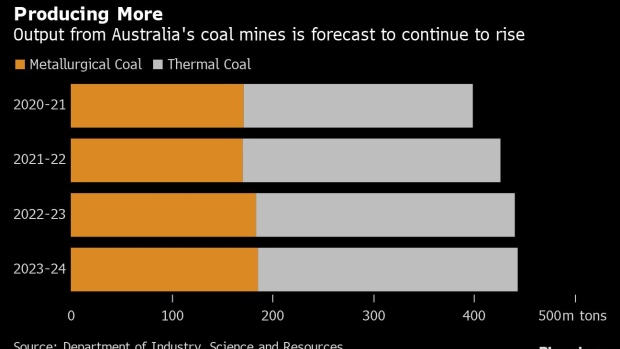 Stacker-reclaimers at the Newcastle Coal Terminal in Newcastle, New South Wales, Australia, on Friday, May 6, 2022. A coal-mining community that has elected the same political party for more than a century could decide Australia’s next government this month in an election that has divided the nation over how to battle climate change. Photographer: Brendon Thorne/Bloomberg , Bloomberg

(Bloomberg) -- Queensland, the Australian state at the heart of the nation’s $63 billion coal export industry, has announced a major shift into renewables as part of a massive program focused on clean energy and jobs.

The plan would involve investment of A$62 billion ($40 billion) from 2022 to 2035 to help unlock 22 gigawatts of clean energy capacity, eight times the current level, the state government said Wednesday. The state plans to increase its Renewable Energy and Hydrogen Jobs Fund by A$2.5 billion to A$4.5 billion to meet new goals, including getting 80% of its energy from renewables by 2035.

Queensland still gets most of its power from burning coal, and is also one of the world’s biggest suppliers of the fuel. Like other states on Australia’s east coast, it has been plagued by faults in its aging power infrastructure that led the nation’s main grid to take the unprecedented step of temporarily suspending the spot power trading market in June.

The state is now looking to accelerate a shift into clean energy such as solar and wind, taking advantage of Australia’s potential as a renewable powerhouse thanks to its sunny climate and sparsely populated outback. Queensland’s plan also envisions the creation of 100,000 jobs by 2040 and the construction of as much as 7 gigawatts of pumped hydro power, including what could be the world’s largest such project, according to the statement.