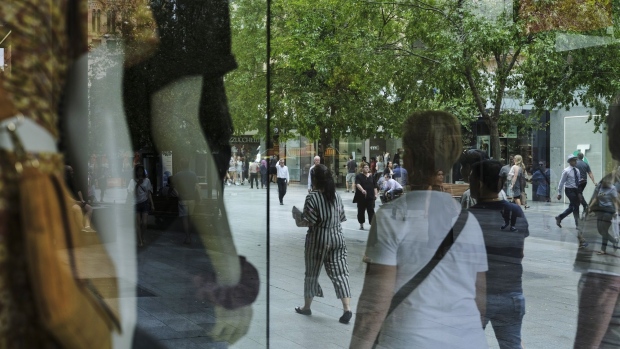 Shoppers and pedestrians are reflected in a store window at Rundle Mall in Adelaide, Australia, on Thursday, Feb. 11, 2021. Melbourne Institute of Applied Economic and Social Research said today that Australian consumers expect prices will rise 3.7% over the next 12 months. Photographer: James Bugg/Bloomberg , Bloomberg

The index dropped 3% to 81.2% in August, meaning pessimists easily exceed optimists, a Westpac Banking Corp. survey showed Tuesday. The index has declined every month since November for a cumulative drop of almost 23%, bringing it to levels reached during the Covid pandemic and 2008-09 global financial crisis.

The survey of 1,200 respondents was conducted in the week when the Reserve Bank of Australia raised its key interest rate for a fourth consecutive month to 1.85% and signaled further increases are likely.

Australia, like much of the developed world, is rapidly tightening monetary policy to try to contain an inflation outbreak fueled by massive stimulus during the pandemic and supply chain disruptions. The price shock has been exacerbated by Russia’s war on Ukraine that has sent energy costs soaring and China’s repeated lockdowns to try to contain virus outbreaks.

The decline in sentiment comes as home prices across Australia are reversing pandemic era gains amid rising mortgage repayments.

“A strong message from the collapse in the index over the last nine months has been the negative attitude to major household purchases where confidence has fallen almost as fast as the 12-month economic outlook,” said Bill Evans, Westpac chief economist.

“It seems likely that inflation, which we still see as the major negative for confidence over this period has been weighing particularly heavily on the attractiveness of consumer durables.”

Australian consumers’ assessment of the economic outlook over the next 12 months deteriorated further, with the sub-index “time to buy a major household item” dropping 8.4%.

Surprisingly, confidence in the labor market remains solid, with a lower share of respondents expecting unemployment will rise from the current 48-year low of 3.5%.