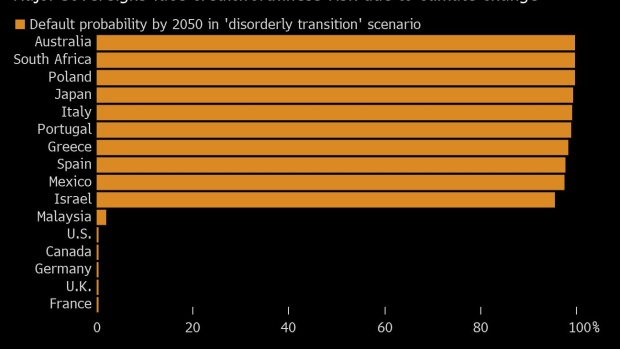 Water is sprayed over piles of coal at the Port of Newcastle in Newcastle, New South Wales, Australia. Photographer: David Gray/Bloomberg , Bloomberg

(Bloomberg) -- A failure to respond to climate change will lead Australia’s debt costs to spiral, according to government planners.

Officials forecast the country’s cost of capital would increase by 100 basis points in an adverse climate-change scenario without its strategy to reach a net-zero emissions target, they wrote in an analysis paper published this month. If Australia was the only developed country without such a goal, the extra cost could jump as much as 300 basis points, they said.

The admission, buried deep in an annex of a long-term emissions reductions plan, may be the first such analysis published by a major government on the climate risk to its sovereign debt. It comes as investors are starting to amp up pressure given Australia is seen as a laggard due to its reliance on coal, with Sweden’s central bank having already dumped the bonds of two of its states.

“It’s a recognition of what’s going on in the world -- investors are becoming very conscious of climate risk, and if countries don’t respond their borrowing costs are going to go up,” said Sean Kidney, co-founder of the Climate Bonds Initiative. “It’s the first time I’ve seen it in print.”

Nations across the world are adopting pledges to eliminate planet-warming emissions, including fellow fossil-fuel exporters such as Saudi Arabia and the United Arab Emirates. For its part, Australia’s plan to reach net-zero emissions by 2050 will only cut the amount of greenhouse gases being produced by a third compared with having no plan at all. It is also dependent on technological advancements emerging over coming decades.

The Australian government’s projections are based on market pricing of green bonds, which are used to fund projects that combat climate change. There is no precedent for quantifying this “cost of inaction” for the nation’s governments, firms and households, the report said.

There is however already evidence that green bonds generate a so-called “greenium”, or cheaper borrowing costs, of a few basis points for sovereign issuers. The dynamics driving this greenium will increase over time, leading to a larger penalty for the debt of climate laggards, the report said.

Australia’s benchmark sovereign bond yields have surged nearly 100 basis points in the past three months to around 1.9%, as global policy makers get ready to reduce the extraordinary stimulus given to markets during the pandemic.

While Australia -- one of the world’s top suppliers of fossil fuels -- has committed to reaching net-zero emissions by 2050, the modeling released by Prime Minister Scott Morrison’s government shows the nation will still be emitting 215 million tons of emissions by that time.

Australia will default on its sovereign debt by 2050 if there’s a disorderly transition in the planet’s efforts to fight climate change, according to research by FTSE Russell.

“It’s good to see that Australia’s Treasury is looking closely at the very serious economic risks of Australia’s climate policy,” said Kate Mackenzie, a fellow at Australia’s Centre for Policy Development and a Bloomberg Green columnist. “We’ve seen from the Swedish Riksbank and other comments from market participants that the source of these risks isn’t limited to the domestic emissions” and “very much include the country’s reliance upon fossil fuel exports.”