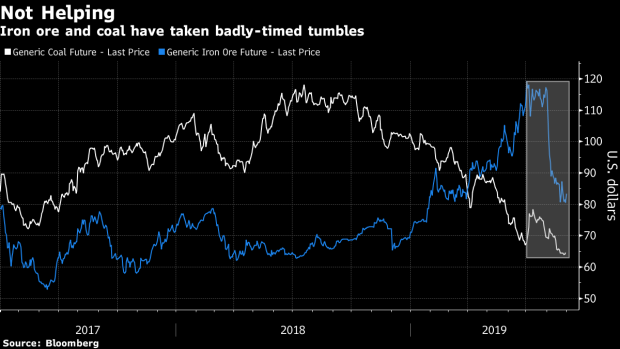 Reserve Bank Governor Philip Lowe will probably keep the cash rate at 1% at Tuesday’s policy meeting as he waits to see the impact of back-to-back cuts that have helped the housing market perk up and hiring remain strong, while the weakening currency continues to play an effective shock absorber.

But economists expect him to cut twice more to 0.5% by March as uncertainty from a worsening U.S.-China trade war darkens the outlook. Given weak growth and inflation at home, Lowe’s unlikely to stop there, particularly with iron ore -- Australia’s biggest export -- on track for its largest ever monthly decline.

Both Lowe and his deputy, Guy Debelle, have suggested the cash rate’s lower bound sits around 0.25%-0.5%, similar to levels reached by the U.S., U.K. and Canada. If the central bank cuts twice more as expected, Nomura Holdings Inc. reckons there’s a 40% probability of it then moving to unconventional policies.

“A term-lending facility -- providing funding for banks at below-market rates, perhaps linked to the cash rate and provided these funds were on-lent -- has more appeal” than other measures discussed, said Andrew Ticehurst, rate strategist at Nomura in Sydney. “This would make any final rate cut more likely to be passed on by banks.”

Australia’s economy has slowed sharply as households struggling with record debt and weak wage growth cut back on spending. Two key supports have been high commodity prices and infrastructure investment; however, the former is falling away as iron-ore supply disruptions end and President Donald Trump’s erratic communications on the U.S.-China conflict erode confidence.

The RBA cut rates in June and July and is watching to see how that easing plays out. Lowe has suggested Australia might in fact be through the worst of its slowdown. He cites a combination of the rate moves and some recent tax cuts -- together with rising property prices, a depreciating currency and increasing mining and infrastructure investment to support his optimism.

The economy probably expanded 0.5% in the three months through June from the prior quarter and 1.4% from a year earlier, surveys show ahead of GDP data due out Wednesday. The annual gain would only be about half the economy’s speed limit. But importantly, all the aforementioned supports for growth start impacting in the second half of this year.

Still, the elephant in the room is Trump’s trade war. Lowe and Debelle argue that while global firms are still hiring, they’re stalling major investments as they wait to see how the upheaval plays out. The risk is that as it drags on, companies will decide to cut their losses and abandon capital expenditure plans, leading them to also start shedding workers and spark a global downturn.

Indeed, the deputy governor last week highlighted the benefits to world growth and welfare from the rules-based global trading system that has been in place for the past few decades.

“The current threats to the system are a significant risk to both Australia and the world,” Debelle said, in a thinly veiled swipe at Trump’s policies.

To contact the reporters on this story: Michael Heath in Sydney at mheath1@bloomberg.net;Tomoko Sato in Tokyo at tsato3@bloomberg.net

To contact the editors responsible for this story: Nasreen Seria at nseria@bloomberg.net, Chris Bourke