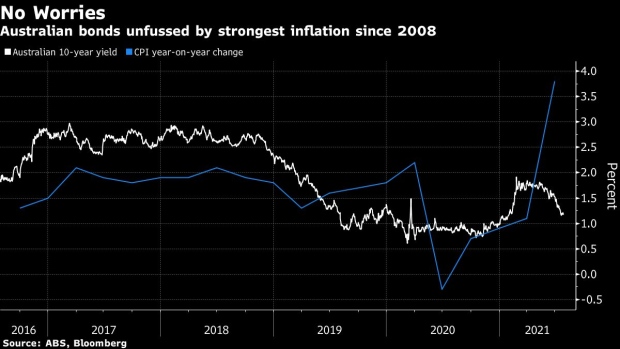 Shoppers at the Queen Victoria Market in Melbourne, Australia, on Thursday, July 22, 2021. Australia has been hit hard by renewed infections from the delta strain of coronavirus that has now pushed half of the country into lockdown, including its two largest cities. , Bloomberg

(Bloomberg) -- Australia’s consumer-price growth surged in the three months through June by the fastest pace since 2008, joining a number of developed economies in recording a jump as a result of lockdown-induced weakness in the corresponding quarter of 2020.

Inflation accelerated to 3.8% in the second quarter from a year earlier, compared with a median forecast of 3.7%, data from the Australian Bureau of Statistics showed Wednesday. From the first three months of the year, the rate was 0.8% versus a forecast 0.7%.

“The annual CPI movement was significantly influenced by Covid-19 related price changes from this time last year,” Michelle Marquardt, head of Prices Statistics, said in a statement. “Key drivers included the full unwinding of the Federal Government’s free childcare package” and “a full return from the drop in fuel prices,” she said.

Inflation is expected to dissipate as price indexes lose the boost from the comparison with the depths of the pandemic last year, underscoring why policy makers are still running record-low interest rates and bond-buying programs to try to spur economic growth and employment.

The report showed the trimmed mean core inflation gauge advanced 0.5% from the first three months of the year, matching economists’ estimates. Compared with the prior year, the index rose 1.6%, matching the median projection.

Australia could be headed for a renewed bout of price weakness with Greater Sydney in lockdown for an extended period as it struggles to contain an outbreak of the delta variant of the coronavirus. Many economists expect gross domestic product will fall in the current quarter before bouncing back in the final three months of the year.

RBA chief Philip Lowe earlier this month announced a slight paring back in bond buying to reflect the strength of the economy. However, the sharp deterioration in the Covid situation since then is prompting some economists to predict he will defer that taper at next week’s meeting.

Lowe has struggled to return inflation to target during his almost five years at the helm and had been using the crisis to try to tighten the labor market sufficiently to spark wage-push inflation. The current round of lockdowns is likely to set that back as jobs are lost from firms forced to shutter.

Today’s report showed the weighted-median gauge, another core measure, advanced 0.5% in the second quarter for an annual increase of 1.7%, both in line with estimates.

Tradables prices, which are typically impacted by the currency and global factors, rose 1.5% in the second quarter from the previous three months. The Australian dollar has fallen about 4% in the past six months.

Non-tradables, which are largely affected by domestic variables like utilities and rents, advanced 0.3%.

(Updates with details from report.)